How to Think Like a Fish: And Other Lessons from a Lifetime in Angling (Hardcover) 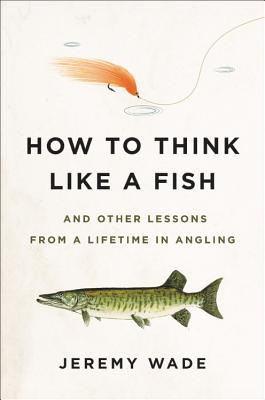 How to Think Like a Fish: And Other Lessons from a Lifetime in Angling (Hardcover)


Special Order—Subject to Availability
The star of the Animal Planet's River Monsters and author of the bestselling companion book shares a meditation on fishing--and life.

In his previous book, Jeremy Wade memorably recounted his adventures in pursuit of fish of staggering proportions and terrifying demeanor: goliath tigerfish from the Congo, arapaima from the Amazon, "giant devil catfish" from the Himalayan foothills, and more.

Now, the greatest angling explorer of his generation returns to delight readers with a book of a different sort, the book he was always destined to write -- the distillation of a life spent fishing.

As Jeremy's catches attract increasing attention, many people ask him how they can improve their own fishing results. This book is his reply: part science, part art, and part elusive something else -- which is within every angler's ability to develop. Along the way you will learn when to let instinct override logic, which details are vital and which may be irrelevant, and how a "non result" can be a result.

Thoughtful and funny, brimming with wisdom and, above all, adventure, these are pitch-perfect reflections that anyone who has ever fished will identify with, for ultimately they touch on the simple, fundamental principles that apply to all angling -- and to life.

Jeremy Wade was the host of River Monsters, one of the most watched, most successful programs in Animal Planet's history, and the current host of Mighty Rivers (Animal Planet). A former science teacher, newspaper reporter, advertising copywriter, he has written for The Times, Guardian, Sunday Telegraph, and BBC Wildlife magazine. He lives in Southern England.