The Cup They Couldn't Lose: America, the Ryder Cup, and the Long Road to Whistling Straits (Hardcover) 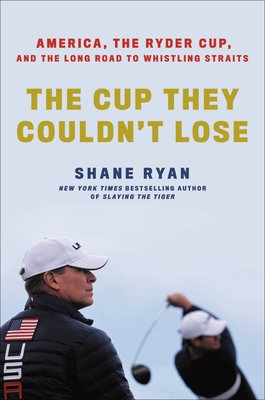 The Cup They Couldn't Lose: America, the Ryder Cup, and the Long Road to Whistling Straits (Hardcover)

The definitive story of the Ryder Cup—the event that pits the best golfers from America against the best from Europe—exploring the modern history of the tournament that led to the showdown at Whistling Straits in 2021.

The task facing Steve Stricker at the 2021 Ryder Cup was enormous. It was his job, as the American captain, to stare down almost 40 years of Ryder Cup history, break a pattern of home losses that had persisted almost as long, and reverse the tide of European dominance in one of golf's most tense and emotional events. This was the epitome of a must-win, but it was also something more—in the entire 93-year history of the event, no American side had ever faced this kind of pressure. Starting on the morning of September 24, those 12 players competed not just for a Cup, or for pride, but to save the reputation of the U.S. team itself.

The great mystery of the Ryder Cup is that America loses despite having superior individual talent. The European renaissance began in the 1980s, led by the brilliant Tony Jacklin and Seve Ballesteros, and since then, the U.S. has suffered a slew of embarrassing defeats abroad and at home. The signs in 2021 weren’t good: Tiger Woods was out after his horrific car crash, Patrick Reed (“Captain America,” to his supporters) was hospitalized with double pneumonia weeks before the event, and America had to rely on its rising stars—including Bryson DeChambeau and Brooks Koepka, who spent most of the year immersed in an escalating feud—to prove their mettle. Meanwhile, the European team had a few major stars of its own, like Jon Rahm, the world no. 1 and the first Spanish player ever to win the U.S. Open, and Rory McIlroy, the four-time major winner. Throw in the complications of a global pandemic, and the stage was set for one of the strangest Ryder Cups ever.

Following the drama in Wisconsin while deconstructing the rich history of the tournament, The Cup They Couldn't Lose tells the story of how the U.S. defeated Europe in record fashion, restored their status as golf’s global superpower, and transformed their entire way of thinking in order to truly understand the nature of the Ryder Cup.

Shane Ryan is the author of the New York Times bestseller Slaying the Tiger. Since Slaying was published in 2015, Ryan has written for Golf Digest and Paste Magazine. He began his journalism career as a writer for Grantland, and he writes occasional essays for the New York Times. His work has also been published in ESPN the Magazine, Deadspin, Esquire, Salon, Slate, and Sports Illustrated.

“Shane Ryan has done a masterful job of capturing the build-up to the 2021 Ryder Cup. This fast-paced narrative moves fluidly from past to present while documenting the actions of the Ryder Cup greats that made it into the marquee event it is today. The Cup They Couldn’t Lose reveals lots of inside-the-ropes information from the folks who were there. Players opened up to Ryan. He was able to get former players and captains to share their feelings, emotions, and strategies about this incredible event. I’m picky about Ryder Cup books, but I couldn’t put this one down.”—Paul Azinger, victorious 2008 U.S. Ryder Cup Captain, 1993 PGA Champion, NBC lead golf analyst, and author of Cracking the Code: The Winning Ryder Cup Strategy

“Shane Ryan tells great stories that are incredibly well-researched, and his understanding of golf and Ryder Cup history stands out. As a Ryder Cup fan, I felt inspired, educated, and energized by this book—I’m betting you will, too.”—Paul McGinley, victorious 2014 European Ryder Cup Captain, member of three Ryder Cup-winning European Teams, Sky Sports commentator, and author of Landscape of Success

“No offense to the many other accounts of the Ryder Cup through the years, but The Cup They Couldn’t Lose… provides the definitive explanation for the European renaissance in the Ryder Cup and how America got its groove back….[Shane Ryan] puts more than a finger on it; he diagnoses what he terms ‘the 40-year disease’ in astounding detail, artfully piecing together the history of this biennial match-play event…The section on England’s Tony Jacklin, who established a template that has been passed down from one European captain to the next, alone is worth the price of the book.”—Golfweek

“It’s golf nerd nirvana, but more than that, it’s a brilliant sociological study of psychology and team-building.”—Yahoo! Sports

“In this definitive analysis of Ryder Cup history—which follows the Cup from the early decades of American dominance through the European resurgence, led by British star Tony Jacklin and the irrepressible Spaniard Seve Ballesteros—Ryan builds to the 2021 match, seen by all as a do-or-die moment for the Americans…. Showing just how Stricker led his team to victory in his home state of Wisconsin, Ryan combines the kind of wonky ‘inside golf’ detail that fans relish with a revealing look at the personalities involved, past and present.”—Booklist

“[An] important, plus entertaining and informative book.”—The Florida Times-Union

“If you have any interest at all in the Ryder Cup in terms of where it’s going and it’s roam next, or where it’s been and why it’s become one of the most important events in sports, this is the book for you.”—"5 Clubs" podcast