Legacy of Violence: A History of the British Empire (Hardcover) 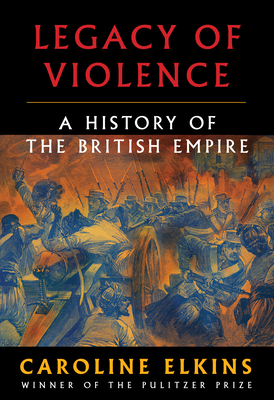 Legacy of Violence: A History of the British Empire (Hardcover)


Not On Our Shelves—Ships in 1-5 Days
From Pulitzer Prize–winning historian: a searing study of the British Empire that probes the country's pervasive use of violence throughout the twentieth century and traces how these practices were exported, modified, and institutionalized in colonies around the globe

Sprawling across a quarter of the world's land mass and claiming nearly seven hundred million people, Britain's twentieth-century empire was the largest empire in human history. For many Britons, it epitomized their nation's cultural superiority, but what legacy did the island nation deliver to the world? Covering more than two hundred years of history, Caroline Elkins reveals an evolutionary and racialized doctrine that espoused an unrelenting deployment of violence to secure and preserve the nation's imperial interests. She outlines how ideological foundations of violence were rooted in the Victorian era calls for punishing recalcitrant "natives," and how over time, its forms became increasingly systematized. And she makes clear that when Britain could no longer maintain control over the violence it provoked and enacted, it retreated from empire, destroying and hiding incriminating evidence of its policies and practices.

Drawing on more than a decade of research on four continents, Legacy of Violence implicates all sides of Britain's political divide in the creation, execution, and cover-up of imperial violence. By demonstrating how and why violence was the most salient factor underwriting Britain's empire and the nation's imperial identity at home, Elkins upends long-held myths and sheds new light on empire's role in shaping the world today.
CAROLINE ELKINS is professor of history and of African and African American studies at Harvard University and the founding director of Harvard's Center for African Studies. Her first book, Imperial Reckoning: The Untold Story of Britain's Gulag in Kenya, was awarded the 2006 Pulitzer Prize for General Nonfiction. She is a contributor to The New York Times Book Review, The Guardian, The Atlantic, The Washington Post, and The New Republic. She has also appeared on numerous radio and television programs, including NPR's All Things Considered and BBC's The World. She lives in Watertown and Marion, Massachusetts.
Longlisted for the Baillie Gifford Prize

“Sweeping and detailed . . . With its enormous breadth and ambition, [Legacy of Violence] amounts to something approaching a one-volume history of imperial Britain’s use of force, torture, and deceit around the world. . . . Assembling so many examples spread widely across space and time allows Elkins to build an impressively damning account of the British Empire.”—Howard W. French, The Nation

“[Elkins’] detailed description of British policy and actions in Ireland, India, Malaya, Cyprus, Kenya, Nyasaland, Jamaica, and Palestine makes for unsettling, yet necessary reading. . . . Thoroughly researched and presented in scrupulous detail, this tale of 'legalized violence,' founded on a racism not even thinly disguised, is a must-read for serious students of history.”—David Keymer, Library Journal (starred review)

“[Elkins] returns to a much larger canvas in her provocative new book . . . A colorful account.”—Geoffrey Wheatcroft, The New York Times Book Review

“Deeply researched . . . Legacy of Violence does not stint on detail. . . . Yet Elkins wears her considerable learning lightly, and is wise enough to allow her considerable anger to smoulder, rather than burn from the pages, making for a powerful, compelling read. . . . The book opens up ground for a wider debate on the factors that shaped the three centuries of British global empire.”—Rana Mitter, Financial Times

“Shocking, meticulous detail . . . Persuasive . . . Legacy of Violence is a formidable piece of research that sets itself the ambition of identifying the character of British power over the course of two centuries and four continents. . . . In many ways, of course, this long history could not be more timely. Elkins offers an open and shut case for those who believe that Rhodes must fall. Her book should, you hope, also find its way into the hands of at least some of that 60% of [the United Kingdom] who, when polled in 2014, thought the British empire was, in general, ‘something to be proud of.’”—Tim Adams, The Guardian

“Legacy of Violence . . . brings detailed context to individual stories. . . . Visiting archives in a dozen countries over four continents, examining hundreds of oral histories, and drawing on the work of social historians and political theorists, Elkins traces the [British] Empire’s arc across centuries and theatres of crisis.”—Sunil Khilnani, The New Yorker

“In this sweeping, ambitious chronicle, [Elkins] extends her commanding investigative and interpretive powers around the globe to include India, South Africa and Palestine. Elkins convincingly makes the case that the British Empire, with its principles cloaked in uplifting paternalism, was built on violence.”—The National Book Review

“‘All empires are violent,’ Caroline Elkins observes in this masterful, crucial study, but Britain’s only became more violent over time, even as it touted its liberalism. Legacy of Violence is as unflinching as it is gripping, as carefully researched as it is urgently necessary.” —Jill Lepore, author of These Truths: A History of the United States

“Caroline Elkins has written the history of the British Empire that we desperately need today. Drawing on recently-disclosed documents, Legacy of Violence catalogues how, time after time, in place after place, British authorities brutally repressed dissent under the cover of laws justifying the use of force. Sweeping, forceful, and passionately argued, it is a definitive rejoinder to persistent myths of liberal benevolence. A monumental achievement.” —Maya Jasanoff, author of The Dawn Watch: Joseph Conrad in a Global World

“Elkins’s intricate but immersive account is a feat of scholarship that elucidates the bureaucratic and legal machinery of oppression, dissects the intellectual justifications for it, and explores in gripping, sometimes grisly detail the suffering that resulted. The result is a forceful challenge to recent historiographical and political defenses of British exceptionalism that punctures myths of paternalism and progress.” —Publishers Weekly (starred review)

“In nothing was the British Empire more successful than its skillful concealment of the violence that it unleashed across the globe, over centuries. Caroline Elkins' Legacy of Violence is a laudably ambitious attempt at unearthing this hidden legacy, the bitter fruits of which are becoming more and more visible every day.” —Amitav Ghosh, author of The Nutmeg’s Curse: Parables for a Planet in Crisis

“Legacy of Violence is a clear, incisive account of the way in which the British maintained public order in the colonies through ‘lawful lawlessness’—in other words, ways in which acts of repression and cruelty were shielded from the public and Parliament by ingenious methods of apparent yet dubious legality. Based on records in Asia and Africa as well as documents in western archives, the research is compelling and persuasive. This is an exceedingly valuable book on the dark side of the British Empire.” —Wm. Roger Louis, Editor-in-Chief of Oxford History of the British Empire

“Once again, Caroline Elkins’ fearless brilliance and prodigious skill in the historical craft bring us to a point of no return in understanding the history of the British empire. Legacy of Violence is a gripping, richly peopled, epic narrative of the systematic perversion of the rule of law whose spread the empire claimed as its legitimizing purpose. In stunning prose and drawing on staggering research, Elkins uncovers the reality of routine and ruthlessly violent suspension of law and militarized policing as imperial personnel and practices moved from crisis to crisis around the globe.” —Priya Satia, author of Time's Monster: How History Makes History

“Elkins explores in this sparkling and troubling book how the long history of ruthless violence in the British Empire was entangled with liberal ideology. Liberal goals justified conquest and repression, and came repeatedly to justify 'legalized lawlessness' from India to Jamaica, Ireland, Palestine, Malaya and Kenya. She shows, further, how this history of colonial terror was suppressed by the destruction of archives and by the manipulation of the historical record by those who wish the national past to be a flattering mirror.” —Richard Drayton, author of Nature’s Government