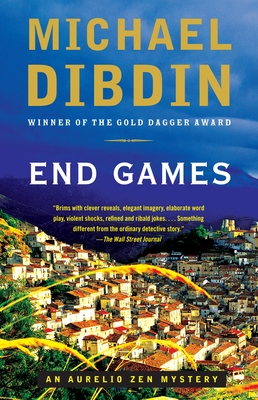 This is book number 11 in the Aurelio Zen Mystery Series series.

When an advance scout for an American film company disappears, Aurelio Zen's most recent assignment in remote Calabria becomes anything but routine. Despite a savage attack that has scared the locals silent, Zen is determined to expose the truth. To make matters more complicated, a group of dangerous strangers, led by a rich, single-minded American have arrived to uncover another local mystery—buried treasure—and they will stop at nothing to achieve their goal. What ensues is a fiendishly suspenseful case that only Aurelio Zen could stumble into and only Michael Dibdin could have created: a wild thriller that takes us deep into a remote region of Italy and the darkest corners of human nature.
Michael Dibdin was born in England and raised in Northern Ireland. He attended Sussex University and the University of Alberta in Canada. He spent five years in Perugia, Italy, where he taught English at the local university. He went on to live in Oxford, England and Seattle, Washington. He was the author of eighteen novels, eleven of them in the popular Aurelio Zen series, including Ratking, which won the Crime Writers’ Association Gold Dagger, and Cabal, which was awarded the French Grand Prix du Roman Policier. His work has been translated into eighteen languages. He died in 2007.
“Brims with clever reveals, elegant imagery, elaborate word play, violent shocks, refined and ribald jokes. . . . Something different from the ordinary detective story.”—The Wall Street Journal “A sterling example of why both Dibdin and Zen will be sorely missed on the crime fiction front.”—The Boston Globe “Clever and exuberantly witty. . . . Captures . . . the Italian national character in all its unruly glory.”—The New York Times “A terrific stylist, prolific and protean. . . . The story is a fitting conclusion to a career that ended too soon.”—The Seattle Times