Without You, There Is No Us: Undercover Among the Sons of North Korea's Elite (Paperback) 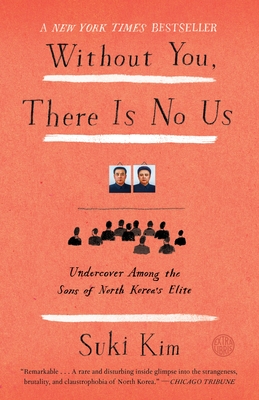 Without You, There Is No Us: Undercover Among the Sons of North Korea's Elite (Paperback)

Every day, three times a day, the students march in two straight lines, singing praises to Kim Jong-il and North Korea: Without you, there is no motherland. Without you, there is no us. It is a chilling scene, but gradually Suki Kim, too, learns the tune and, without noticing, begins to hum it. It is 2011, and all universities in North Korea have been shut down for an entire year, the students sent to construction fields—except for the 270 students at the all-male Pyongyang University of Science and Technology (PUST), a walled compound where portraits of Kim Il-sung and Kim Jong-il look on impassively from the walls of every room, and where Suki has gone undercover as a missionary and a teacher. Over the next six months, she will eat three meals a day with her young charges and struggle to teach them English, all under the watchful eye of the regime.

Life at PUST is lonely and claustrophobic, especially for Suki, whose letters are read by censors and who must hide her notes and photographs not only from her minders but from her colleagues—evangelical Christian missionaries who don't know or choose to ignore that Suki doesn't share their faith. As the weeks pass, she is mystified by how easily her students lie, unnerved by their obedience to the regime. At the same time, they offer Suki tantalizing glimpses of their private selves—their boyish enthusiasm, their eagerness to please, the flashes of curiosity that have not yet been extinguished. She in turn begins to hint at the existence of a world beyond their own—at such exotic activities as surfing the Internet or traveling freely and, more dangerously, at electoral democracy and other ideas forbidden in a country where defectors risk torture and execution. But when Kim Jong-il dies, and the boys she has come to love appear devastated, she wonders whether the gulf between her world and theirs can ever be bridged.

Without You, There Is No Us offers a moving and incalculably rare glimpse of life in the world's most unknowable country, and at the privileged young men she calls "soldiers and slaves."
Suki Kim is the author of the award-winning novel The Interpreter and the recipient of Guggenheim, Fulbright, and Open Society fellowships. Her essays and articles have appeared in the New York Times, Harper’s, The New Republic, and the New York Review of Books. Born and raised in Seoul, she lives in New York.
A New York Times Bestseller

"Chilling…reminds us that evil is not only banal; it is also completely arbitrary."
—New York Times Book Review

"Quasi-apocalyptic, but amazingly not speculative…I devoured [it] for its wry and rare observations on that inexplicable land."
—Daniel Handler, Wall Street Journal

"Daring...Kim finds that paranoia is contagious — and can become chillingly routine. 'My little soldiers were also little robots,' she writes before departing, mourning not only that she must leave, but that they must stay."
—Boston Globe

"Remarkable…A deeply unsettling book, offering a rare and disturbing inside glimpse into the strangeness, brutality and claustrophobia of North Korea… Kim's book is full of small observations that vividly evoke the paranoia and loneliness of a nation living in fear and in thrall to its 'Great Leaders'…Her portraits of her students are tender and heartbreaking, highlighting the enormity of what is at stake."
—Chicago Tribune

"A book about censorship, trust, fear, love, and truth, seen through the prism of a school that functions as a comfortable prison…The title comes from a song the students sing in honor of 'The Dear Leader,' including the lyric, 'Without you, there is no us.' Within that title, and this book, is a multitude of truths."
—Philadelphia Inquirer

"Enthralling...Reveals the perplexing innocence and ignorance of one of the world’s most secretive countries."
—O: The Oprah Magazine

"A devastatingly vulnerable account... Kim’s stark and delicate language, intertwined with the suspense of being an undercover journalist in a foreign-yet-familiar land, truly humanized North Korea for me."
—Slate

"Touching, beautifully written...A rare, intimate portrait of life in the world’s least-known country: grinding poverty for the masses,  bland tedium for the ruling class, no fun, no freedom, and fear for all."
—Katha Pollitt, Salon

“[Kim’s] account is fascinating…She is an outsider telling an inside story…Her relationship with her students is the most interesting part of her book…It is tempting to treat the cult of the North Korean Kim dynasty as a grotesque joke, as the makers of The Interview, the recent Hollywood movie about an assassination plot against the current "Supreme Leader” Kim Jong-un, have done. Suki Kim, quite rightly, does not. The oppression and starvation of millions of people, and a gulag that enslaves up to 200,000 prisoners, many of them worked to death, is really not that funny… Kim got a close look at some of the cult’s manifestations…Her frustration and rage about the waste of young lives and talent crushed by a horribly oppressive system is entirely justified. Being punished for dissent is bad enough. But to be forced to parrot lies and keenly applaud one’s enforcers is a form of constant mental torture.”
—Ian Buruma, New York Review of Books

"A starkly revealing look at this hermit nation...Kim opens herself as well as the DPRK to scrutiny...Moving and emotionally evocative."
—Pittsburgh Post-Gazette

"We in the West know almost nothing about life in North Korea, including even how its elites live (read Suki Kim's terrific Without You, There Is No Us for one of the few accounts)."
—The Nation

"Suki Kim’s compelling reports for Harper’s, The New York Review of Books, and others have expanded and deepened our understanding both of life in the North, and the West’s profound misapprehensions about it.…[This book is] a fascinating, if deeply fraught document about the education of the North Korean elite, an aspect of the country that until very recently has been almost completely occluded… Kim’s access to the boys constitutes the unique nature of her book [and] illuminates just how sheltered they are."
—Los Angeles Review of Books

"[An] extraordinary and troubling portrait of life under severe repression…[Kim’s] account is both perplexing and deeply stirring."
—Publishers Weekly, starred review

"A rare and nuanced look at North Korean culture, and an uncommon addition to the 'inspirational-teacher' genre."
—Booklist, starred review

"A touching portrayal of the student experience in North Korea, which provides readers with a rare glimpse of life in this enigmatic country...Well-written and thoroughly captivating."
—Library Journal, starred review

"Strangely terrifying…A beautifully written book that greatly expands the limited bounds of what we know about North Korea’s ruling class."
—Barbara Demick, author of Nothing to Envy

"Terrifying and sublime, Without You, There Is No Us is a stealth account of heartbreak. Suki Kim, brilliant author of The Interpreter, penetrates the soul of her divided country of origin, bearing witness to generations of maimed lives and arrested identities. This look inside totalitarian North Korea is like no other."
—Jayne Anne Phillips, author of Lark and Termite and Quiet Dell

"This superb work of investigative journalism is distinguished by its grave beauty and aching tenderness. So skilled is Suki Kim in conveying the eeriness and surreal disconnect of the North Korean landscape that I sometimes felt I was reading a ghost story, one that will haunt me with its silences, with its image of snow falling upon a desolate campus, with the far laughter of her beloved students."
—Kiran Desai, author of The Inheritance of Loss

"Like an explorer returned from a distant planet or another dimension, Suki Kim has many extraordinary tales to tell, among them how different—and how awful—life is for those who live in North Korea. The devil is in the details here, for her gritty narrative focuses on everyday events to reveal how repression shapes daily life, even for the most privileged. Yet Kim also bears witness to that part of the human soul that no oppressor can ever claim."
—Carlos Eire, author of Waiting for Snow in Havana

"In language at once stark and delicate, Suki Kim shatters the polemic of North and South Korea. She couples an investigative reporter's fierce desire to strip away the fiction of the Hermit Kingdom with an immigrant's insatiable hunger for an emotional home, no matter how troubled and no matter how impossible."
—Monique Truong, author of The Book of Salt

"Combining a great novelist's eye for character and a skilled journalist's grasp of politics, Without You, There Is No Us helps us understand North Korea like nothing else I have ever read or watched. The elegance of Kim's prose and her great compassion for ordinary people caught up in an extraordinary situation kept me turning the pages, riveted by her story. This is a book that rejoins North Korea with humanity."
—Suketu Mehta, author of Maximum City

"What a unique book this is! It delivers a beautifully and bravely observed inside account—startling, insightful, moving—of the planet's most notoriously closed and bewildering society.  But what I liked best about it was being in the company of Suki Kim's voice—so intimate, vulnerable, obsessive, resilient, confiding and charming."
—Francisco Goldman, author of Say Her Name and The Interior Circuit