Top of the Rock: Inside the Rise and Fall of Must See TV (Paperback) 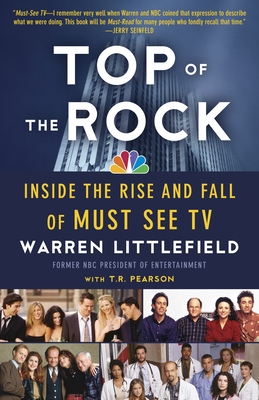 Top of the Rock: Inside the Rise and Fall of Must See TV (Paperback)

Top of the Rock is an absorbing insiders’ account of an incredible time and place in television history: the years when Must See TV—led by Cheers, Seinfeld, Friends, ER, and Law & Order—made NBC an unstoppable success. Here the story is vividly told through the words of the actors, writers, producers, creators, and network executives who helped the Peacock rise to its greatest heights—and then saw it all fall apart.

Under the supervision of President of Entertainment Warren Littlefield, NBC went from being an also-ran, losing millions of dollars in failed shows, to the number one station, generating billions of dollars in profit. At its height, the Thursday night lineup alone brought in more revenue than the other six nights of programming combined. Top of the Rock dishes out behind-the-scenes stories from all the biggest shows, revealing the highly risky business decisions, creative passion, and blind leaps of faith that made Must See TV possible.

WARREN LITTLEFIELD is the former NBC president of entertainment. Previous to that, he was the NBC comedy executive who developed such hit shows as The Cosby Show and The Fresh Prince of Bel-Air. He currently runs his own television production company.

T. R. PEARSON is the author of fourteen novels, including A Short History of a Small Place, and a dozen screenplays.

“Must-See TV—I remember very well when Warren and NBC coined that expression to describe what we were doing. This book will be Must-Read for many people who fondly recall that time.” —Jerry Seinfeld

“Engrossing and lively . . . [Littlefield] enlists the voices of many of the actors and creative forces behind such hits as Seinfeld, Will & Grace, Cheers and ER to help him chronicle the glory days of ‘Must See TV.’”
—The Chicago Sun-Times

“A chronicle of the last golden age of network television, [Top of the Rock] is the literary equivalent of a former NBC Thursday night lineup . . . . Littlefield is the ultimate Must See insider. The mini-histories are a blast . . . full of fresh detail.”
—The Hollywood Reporter

“Warren Littlefield has reminded us of what was possible not so long ago. . . . [recounting] his successful run at NBC and the inside stories of the shows that made it happen.”
—TV Guide

“A fascinating oral history of shows like Seinfeld that defined an era.”
—Daily News

“While the general public will likely focus on how Seinfeld got made and what made the cast of Friends tick, industry insiders will be looking for dirt, and there is no shortage of that.”
—Los Angeles Times

“You are what your record says you are, and Littlefield’s record at NBC in the ’90s was tremendous.”
—The Newark Star-Ledger

“With an entertaining insider's perspective, Littlefield transports readers back to a seemingly magical time when half the country would watch the same show.”
—Kirkus Reviews

“Littlefield unleashed a ‘financial geyser’ at NBC, and these revelatory glimpses of those glory days make this one of the more entertaining books published about the television industry.”
—Publishers Weekly