For the Glory: College Football Dreams and Realities Inside Paterno's Program (Paperback) 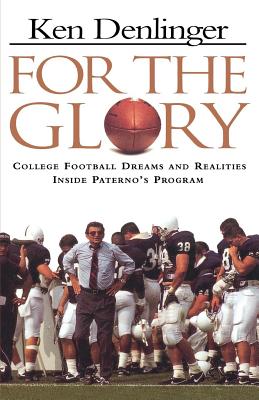 For the Glory: College Football Dreams and Realities Inside Paterno's Program (Paperback)

For the Glory: College Football Dreams and Realities Inside Paterno's Program presents the college football experience as seen through the eyes of the young men who play the game.

Sportswriter Ken Denlinger takes the reader on a five-year odyssey into the lives of one scholarship class and reveals their experiences at Penn State and in Coach Joe Paterno's program.

Ken was given extraordinary access to the Penn State programs--starting with the recruiting process and then onto the field and in the locker room. He became friend and confidant to the players and found every player had the same dream: to bring glory to himself and his school and then ascend to the NFL. In this gritty account, Ken sets moving stories of triumph against the stark realities of injury, disillusionment, and failure.

Here are the dreams, fears, and pressures facing young men who are exposed weekly to thousands of screaming fans. Here is a true picture of life in Division I college football. Anyone interested in Penn State, college football, or the larger issues or sports and society will find For the Glory an unforgettable experience.

Ken Denlinger was a longtime sportswriter for The Washington Post and covered college football. He's the author of Athletes for Sale and For the Glory. He lived in Gaithersburg, Maryland and was a Penn State alumnus, class of 1964.

“There is nothing tougher to infiltrate than a major college football team, and that includes the White House, the CIA and the FBI, and Ken Denlinger's For The Glory has done just that. In doing so, he has delivered a remarkable portrait of college football: the good, the bad, the bitter, and the sweet.” —John Feinstein, author of A Season on the Brink