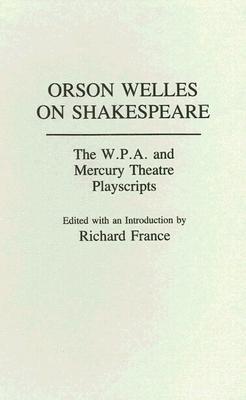 This fascinating work will prove valuable for collections in film, theater history, and Shakespearean production. . . . The book includes fascinating production photos and helpful notes in which the original acts and scenes are identified, thus showing the extent to which Welles rearranged Shakespeare by shuffling acts and scenes, dropping characters, and by merging related narratives. . . . Recommended for all libraries. Choice

This volume contains the fully annotated playscripts of Orson Welles' celebrated adaptations of three Shakespearean plays. Texts for the Voodoo Macbeth and the modern dress Julius Caesar are stage managers' working copies used by the Federal Theatre Project of the Works Progress Administration (W.P.A.) and the Mercury Theatre; the version of Five Kings, Welles' compilation of the history plays and his theatrical masterpiece, is the oldest surviving text, and is the fullest and most inclusive. This is the first publication of these materials, which were originally produced by Welles between 1936 and 1939. Orson Welles' New York directorial debut was made in 1936 with his production of the Voodoo Macbeth. Richard France's introduction provides invaluable background information that relates the three plays and their productions to the contemporary social, historical, political, and economic climate of the 30s, in discussions that touch not only on the W.P.A., but also on the effect of the American Communist Party ideology on theatre arts and criticism, on the composition of theatre audiences, and on the expectations of such fervently liberal or leftist audiences. France contends that Welles, in his W.P.A. and Mercury Theatre productions, presided over a unique marriage of art and the highly politicized popular culture of the day. These productions ensured Welles' enormous success and have earned him an important niche in American social and cultural history.

Following the general introduction, the volume is divided into three sections. A preface to each of the scripts contains further biographical and background data relevant to that play, as well as critical materials, production photos, and facsimile pages. Information about the creation and production of Voodoo Macbeth (1936), Julius Caesar (1937), and Five Kings (1939) was gathered in numerous interviews with Welles' W.P.A. and Mercury Theatre collaborators. Each playscript is proceeded by production credits and a cast list and followed by a section of notes that contains Welles' own directorial marginalia. This singular and very focused volume will be a distinguished addition to courses in American Drama, American Studies, Play Production, and in courses that explore idiosyncratic productions of Shakespeare.

RICHARD FRANCE teaches at the University of Southern California. His many plays include The Image of Elmo Doyle, contained in the Best Short Plays of 1979, the dramitization of One Day in the Life of Ivan Denisovich, and Station J, winner of the 1982 Silver PEN award. He has previously taught at Brown University and Lawrence University and his book The Theatre of Orson Welles was a Choice selection for Most Outstanding Academic Books of 1978.