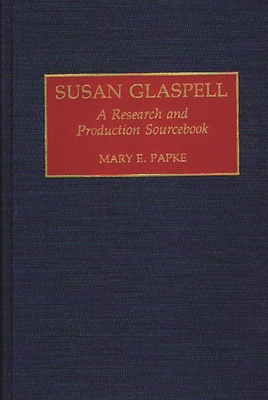 Co-founder of the Provincetown Players and one of its leading writers, Susan Glaspell won the Pulitzer Prize for Alison's House (1930) and was also successful as an actress, producer, and novelist. Her plays were compared, often favorably, with O'Neill's. After a period of eclipse, Glaspell's concern with woman's desire for selfhood brought her plays to the attention of feminist scholarship beginning in the 1970s. Mary Papke argues in this work for a reassessment of Glaspell as a major American playwright. This sourcebook begins with a bio-critical survey and includes plot summaries for each staged work, complete with production history and critical reception. An annotated bibliography of primary works includes plays, novels, short fiction, nonfiction, nonprint, and archival sources. The secondary bibliography documents reviews and provides extensive annotations for a broad range of materials. Chronologically organized, it constitutes a detailed examiniation of Glaspell criticism.

MARY E. PAPKE is Assistant Professor of English at the University of Tennessee, Knoxville. Her areas of specialization include late nineteenth and early twentieth century literature by American women and feminist theory. She is the author of Verging on the Abyss: The Social Fiction of Kate Chopin and Edith Wharton (Greenwood, 1990).