Strategies of Drama: The Experience of Form (Bibliographies and Indexes in Religious Studies #39) (Hardcover) 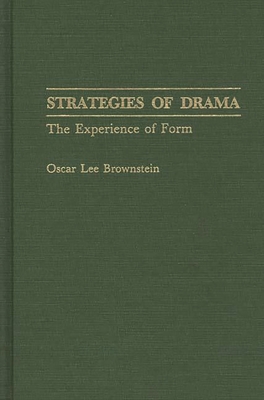 Strategies of Drama: The Experience of Form (Bibliographies and Indexes in Religious Studies #39) (Hardcover)

In this unique study of the dramatic form, Oscar Lee Brownstein presents a personal analysis of the way in which experience is created by drama. A variety of plays are discussed and examined as perceptual objects, structures whose designs are entirely determined by the fact that they are meant to be perceived. Brownstein focuses on the distinct aspects of the dramatic art form and on its special powers to orchestrate the imagination and produce a personal encounter in the lives of spectators. In so doing, he provides a practical critical theory of drama that is sophisticated yet accessible.

Approaching drama from a phenomenological perspective, Brownstein strives not to interpret the plays themselves, but rather his own perceptions and the sources that prompted them. Covering the wide history of Western drama from the Greeks to the present day, he treats in detail a small number of works that are readily familiar. He offers an extensive theoretical survey of the perception shift that infuses even the smallest element of a play, as well as those forces that are expressed through major dramatic strategies. Also addressed are the ways in which a single narrative sequence may serve all dramatic strategies. Some of the plays discussed include King Lear, A Streetcar Named Desire, Betrayal, Oedipus Rex, and Waiting for Godot. This work will be an important resource for students of dramaturgy, criticism, and dramatic theory, as well as for writers, directors, and actors involved in the dramatic arts.

OSCAR LEE BROWNSTEIN is the former Chairman of the Playwriting Department at the Yale School of Drama. His numerous articles have appeared in journals such as the Shakespeare Quarterly and the Theatre Journal, and he is the author of the Analytical Sourcebook of Concepts in Dramatic Theory (Greenwood Press, 1981).