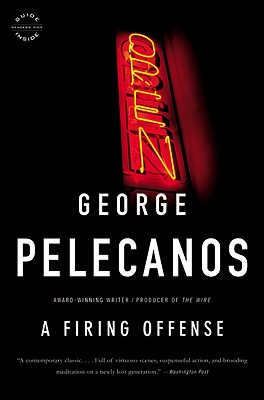 This is book number 1 in the Nick Stefanos Series series.

As the advertising director of Nutty Nathan's, Nick Stefanos knows all the tricks of the electronics business. Blow-out sales and shady deals were his life. When one of the stockboys disappears, it's not news: just another metalhead who went off chasing some dream of big money and easy living. But the kid reminded Nick of himself twelve years ago: an angry punk hooked on speed metal and the fast life. So when the boy's grandfather begs Nick to find the kid, Nick says he'll try. A Firing Offense, Nick Stefanos' debut, shows why, as Barry Gifford puts it, "To miss out on Pelecanos would be criminal."
George Pelecanos is the bestselling author of twenty novels set in and around Washington, D.C. He is also an independent film producer, and a producer and Emmy-nominated writer on the HBO series The Wire, Treme, and The Deuce. He lives in Maryland.