Fire in the Lake: The Vietnamese and the Americans in Vietnam (Paperback) 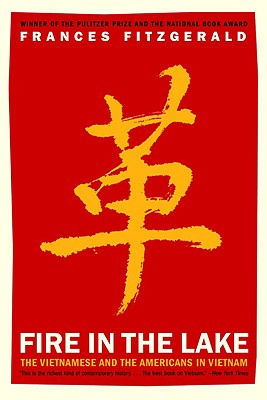 Fire in the Lake: The Vietnamese and the Americans in Vietnam (Paperback)


On Our Shelves Now at:
Frances FitzGerald's landmark history of Vietnam and the Vietnam War, "a compassionate and penetrating account of the collision of two societies that remain untranslatable to one another." (New York Times Book Review)

This magisterial work, based on Frances FitzGerald's many years of research and travels, takes us inside the history of Vietnam -- the traditional, ancestor-worshiping villages, the conflicts between Communists and anti-Communists, Catholics and Buddhists, generals and monks, the disruption created by French colonialism, and America's ill-fated intervention -- and reveals the country as seen through Vietnamese eyes.

Originally published in 1972, Fire in the Lake was the first history of Vietnam written by an American and won the Pulitzer Prize, the Bancroft Prize, and the National Book Award. With a clarity and insight unrivaled by any author before it or since, Frances FitzGerald illustrates how America utterly and tragically misinterpreted the realities of Vietnam.
Frances FitzGerald is the recipient of the Pulitzer Prize, the National Book Award, the Bancroft Prize, and a prize from the National Academy of Arts and Sciences. She is the author of The Evangelicals: The Struggle to Shape America; Fire in the Lake: the Vietnamese and the Americans in Vietnam; America Revised: History School Books in the Twentieth Century; Cities on a Hill: A Journey through Contemporary American Cultures; Way Out in the Blue: Reagan, Star Wars and the End of the Cold War; and Vietnam: Spirits of the Earth. She has written for The New Yorker, The Atlantic, Harper's, The New York Review of Books, The Nation, Rolling Stone, and Esquire.