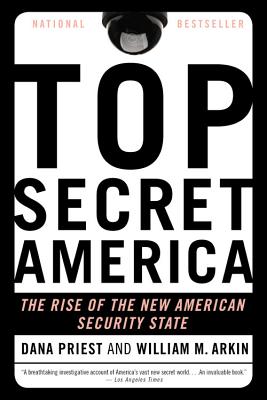 
Not On Our Shelves—Ships in 1-5 Days
The top-secret world that the government created in response to the 9/11 terrorist attacks has become so enormous, so unwieldy, and so secretive that no one knows how much money it costs, how many people it employs or exactly how many agencies duplicate work being done elsewhere. The result is that the system put in place to keep the United States safe may be putting us in greater danger. In Top Secret America, award-winning reporters Dana Priest and William Arkin uncover the enormous size, shape, mission, and consequences of this invisible universe of over 1,300 government facilities in every state in America; nearly 2,000 outside companies used as contractors; and more than 850,000 people granted "Top Secret" security clearance.

A landmark exposé of a new, secret "Fourth Branch" of American government, Top Secret America is a tour de force of investigative reporting-and a book sure to spark national and international alarm.
Dana Priest is an investigative reporter for the Washington Post. She has won numerous awards, including the 2008 Pulitzer Prize for public service for "The Other Walter Reed" and the 2006 Pulitzer for beat reporting for her work on CIA secret prisons and counterterrorism operations overseas. She is the author of The Mission: Waging War and Keeping Peace with America's Military. William M. Arkin has been a columnist and reporter with the Washington Post since 1998. He has worked on the subject of government secrecy and national security affairs for more than 30 years. He has authored or co-authored more than a dozen books about the U.S. military and national security.
"A breathtaking investigative account of America's vast new secret world...An invaluable book."—Los Angeles Times