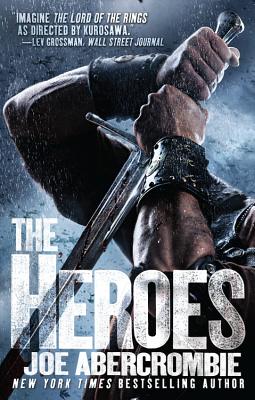 
Not On Our Shelves—Ships in 1-5 Days
They say Black Dow's killed more men than winter, and clawed his way to the throne of the North up a hill of skulls. The King of the Union, ever a jealous neighbor, is not about to stand smiling by while he claws his way any higher. The orders have been given and the armies are toiling through the northern mud. Thousands of men are converging on a forgotten ring of stones, on a worthless hill, in an unimportant valley, and they've brought a lot of sharpened metal with them.

For glory, for victory, for staying alive.
Joe Abercrombie is the New York Times bestselling author of Red Country and the First Law trilogy: The Blade Itself, Before They Are Hanged, and Last Argument of Kings. He is a full-time writer and occasional freelance film editor who lives in Bath, England with his wife and three children.
"Lord of the rings as directed by Kurosawa" --- Wall Street Journal.

"Abercrombie never glosses over a moment of the madness, passion, and horror of war, nor the tribulations that turn ordinary people into the titular heroes." --- Publishers Weekly (Starred Review)

"The Heroes is an indictment of war and the duplicity that corrupts men striving for total power: bloody and violent, but never gratuitously so, it's imbued with cutting humour, acute characterisation and world-weary wisdom about the weaknesses of the human race. Brilliant." --- Eric Brown, The Guardian (UK)

"It's an excellent tale and arguably Abercrombie's best book yet ... Its pace really showcases his talent for differently voiced and realistically motivated characters ... any genre fan can enjoy what's one of the best fantasy books of the past year." --- SciFi Now (5 star review)