The Tipping Point: How Little Things Can Make a Big Difference (Hardcover) 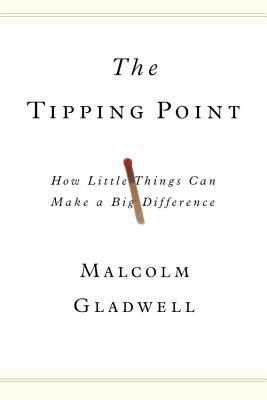 The Tipping Point: How Little Things Can Make a Big Difference (Hardcover)


Not On Our Shelves—Ships in 1-5 Days
From the bestselling author of The Bomber Mafia: discover Malcolm Gladwell's breakthrough debut and explore the science behind viral trends in business, marketing, and human behavior. The tipping point is that magic moment when an idea, trend, or social behavior crosses a threshold, tips, and spreads like wildfire. Just as a single sick person can start an epidemic of the flu, so too can a small but precisely targeted push cause a fashion trend, the popularity of a new product, or a drop in the crime rate. This widely acclaimed bestseller, in which Malcolm Gladwell explores and brilliantly illuminates the tipping point phenomenon, is already changing the way people throughout the world think about selling products and disseminating ideas.

“A wonderful page-turner about a fascinating idea that should affect the way every thinking person looks at the world.” —Michael Lewis
Malcolm Gladwell is the author of seven New York Times bestsellers: The Tipping Point,Blink, Outliers,What the Dog Saw,David and Goliath, Talking to Strangers, and The Bomber Mafia. He is also the co-founder of Pushkin Industries, an audio content company that produces the podcasts Revisionist History, which reconsiders things both overlooked and misunderstood, and Broken Record, where he, Rick Rubin, and Bruce Headlam interview musicians across a wide range of genres. Gladwell has been included in the Time 100 Most Influential People list and touted as one of Foreign Policy'sTop Global Thinkers.