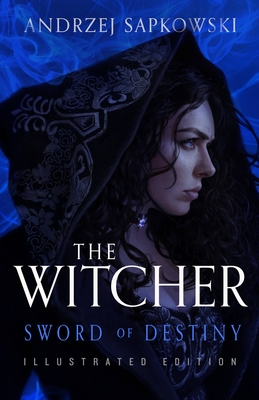 This is book number 2 in the The Witcher series.

Experience the world of the Witcher like never before with this stunning hardcover edition of Sword of Destiny, featuring a gorgeous new cover and six full-page interior illustrations from a range of award-winning artists!

Andrzej Sapkowski’s Witcher series introduced the world to iconic monster hunter Geralt of Rivia; his beloved ward and the prophesied savior of the world, Ciri; and his ally and true love, the powerful sorceress Yennefer—and they took the world by storm. Since its first publication in Poland almost three decades ago, The Witcher has become a New York Times and international bestseller and has inspired a hit Netflix show and multiple blockbuster video games.

In this bestselling collection of stories, Geralt's adventures take him from Novigrad to Brokilon forest, from hunting dragons to helping mermaids—and ultimately, the Witcher must face the question of his own destiny. Join him as he battles monsters, demons, and prejudices alike in an unforgettable world of magic and myth! And be sure to check out the deluxe illustrated edition of The Last Wish, the companion story collection.

Andrzej Sapkowski is the author of the Witcher series and the Hussite Trilogy. He was born in 1948 in Poland and studied economics and business, but the success of his fantasy cycle about Geralt of Rivia turned him into an international bestselling writer. Geralt’s story has inspired the hit Netflix show and multiple video games, has been translated into thirty-seven languages, and has sold millions of copies worldwide.

"This is a series you can sink your teeth into."—BuzzFeed News

"Like Mieville and Gaiman, [Sapkowski] takes the old and makes it new."—Foundation