Down the River unto the Sea (Paperback) 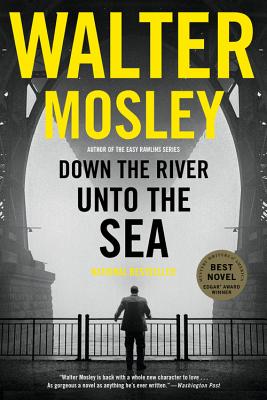 Down the River unto the Sea (Paperback)


On Our Shelves Now at:
Winner of the Edgar Award for Best Novel of the Year: bestselling author Walter Mosley "is back with a whole new character to love...As gorgeous a novel as anything he's ever written" (Washington Post).

Joe King Oliver was one of the NYPD's finest investigators until he was framed for sexual assault by unknown enemies within the force. A decade has passed since his release from Rikers, and he now runs a private detective agency with the help of his teenage daughter. Physically and emotionally broken by the brutality he suffered while behind bars, King leads a solitary life, his work and his daughter the only lights. When he receives a letter from his accuser confessing that she was paid to frame him years ago, King decides to find out who wanted him gone and why.

On a quest for the justice he was denied, King agrees to help a radical black journalist accused of killing two on-duty police officers. Their cases intertwine across the years and expose a pattern of corruption and brutality wielded against the black men, women, and children whose lives the law destroyed. All the while, two lives hang in the balance: King's client's and his own.

"A wild ride that delivers hard-boiled satisfaction while toying with our prejudices and preconceptions." —Steph Cha, Los Angeles Times
Walter Mosley is one of America's most celebrated and beloved writers. A Grand Master of the Mystery Writers of America, he has won numerous awards, including the Anisfield-Wolf Award, a Grammy, a PEN USA's Lifetime Achievement Award, and several NAACP Image Awards. His books have been translated into more than twenty languages. His short fiction has appeared in a wide array of publications, including The New Yorker, GQ, Esquire, Los Angeles Times Magazine, and Playboy, and his nonfiction has been published in The New York Times Book Review, The New York Times Magazine, Newsweek, and The Nation. He is the author of Down the River unto the Sea. He lives in New York City.
"Walter Mosley is back with a whole new character to love. . . . As gorgeous a novel as anything he's ever written. And with Joe King Oliver I'm betting, and hoping, he's given us a character we haven't see the last of."—Richard Lipez, Washington Post

"A wild ride that delivers hard-boiled satisfaction while toying with our prejudices and preconceptions . . . The darker and uglier the story gets, the more Joe King Oliver comes alive. . . . The journey is fun and joyful. . . . A fitting work for a world riddled with dark contradiction."—Steph Cha, Los Angeles Times

"Down the River Unto the Sea is a well-constructed crime novel, urgent in its plotting and carefully observed in the behaviors and the voices of its supporting cast. Mosley makes it all look simple, creating in Joe King Oliver another fascinatingly flawed detective brimming with potential."—Michael Berry, San Francisco Chronicle

"This is one of those books that leaves you a little breathless--not only while you're reading, but once the back cover's closed, too. For anyone who loves hard-bitten PI thrillers, reading Down the River unto the Sea couldn't be more right."—Teri Schlichenmeyer, Miami Times

"Rekindles some of the remarkable energy that drove the early Rawlins novels. . . . Mosley writes with great power here about themes that have permeated his work: institutional racism, political corruption, and the ways that both of these issues affect not only society at large but also the inner lives of individual men and women. And he has created a new hero in Joe Oliver with the depth and vulnerability to sustain what readers will hope becomes a new series. . . . It's the perfect moment for Mosley to unveil an exciting new hero and a series set in the present and confronting the issues that drive today's headlines."—Booklist (starred review)

"[An] excellent standalone . . . The novel's dedication--to Malcolm, Medgar, and Martin--underlines the difference that one man can make in the fight for justice."—Publishers Weekly (starred review)

"A heady stew of racial politics and seedy characters that Mosley's fans are sure to eat up."—AARP

"It's Mosley's signature style--rough-hewn, rhythmic, and lyrical--that makes you ready and eager for whatever he's serving up. . . . Let the good times roll."—Kirkus Reviews

"Mosley's poetic descriptions of not only New York City but his character's deepest souls elevate the story to beauty. Although the characters, large and small, are all compelling, in the end it is King's story to tell, as he struggles to decide how much he's willing to risk to get the truth."—Strand Magazine

"Mosley's newest standalone has the markings of a classic hard-boiled New York novel... It's also a poignant page-turner whose larger themes--corruption, institutional racism, and the horrors of solitary confinement--speak to some of today's most pressing issues."—Charles Perry, LitHub

"[An] engaging standalone . . . Mosley fans will welcome another imaginative page-turning from a mystery grand master."—Library Journal