Assad or We Burn the Country: How One Family's Lust for Power Destroyed Syria (Paperback) 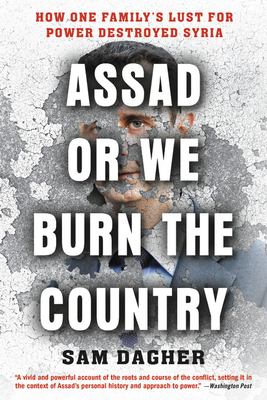 Assad or We Burn the Country: How One Family's Lust for Power Destroyed Syria (Paperback)


Not On Our Shelves—Ships in 1-5 Days
From a Pulitzer Prize-nominated journalist specializing in the Middle East, this groundbreaking account of the Syrian Civil War reveals the never-before-published true story of a 21st-century humanitarian disaster.

In spring 2011, Syrian President Bashar al-Assad turned to his friend and army commander, Manaf Tlass, for advice about how to respond to Arab Spring-inspired protests. Tlass pushed for conciliation but Assad decided to crush the uprising -- an act which would catapult the country into an eight-year long war, killing almost half a million and fueling terrorism and a global refugee crisis.

Assad or We Burn the Country examines Syria's tragedy through the generational saga of the Assad and Tlass families, once deeply intertwined and now estranged in Bashar's bloody quest to preserve his father's inheritance. By drawing on his own reporting experience in Damascus and exclusive interviews with Tlass, Dagher takes readers within palace walls to reveal the family behind the destruction of a country and the chaos of an entire region.

Dagher shows how one of the world's most vicious police states came to be and explains how a regional conflict extended globally, engulfing the Middle East and pitting the United States and Russia against one another. Timely, propulsive, and expertly reported, Assad or We Burn the Country is the definitive account of this global crisis, going far beyond the news story that has dominated headlines for years.
Sam Dagher has reported in the Middle East for more than fifteen years, most recently for The Atlantic. He was the only non-Syrian reporter for a major Western media outlet based in Damascus from 2012 to 2014, a period during which he was arrested by a pro-Assad militia and briefly held in an underground mukhabarat (secret police) prison. He was later expelled from Syria for reporting deemed unfavorable to the regime.

He has worked for the Wall Street Journal, the New York Times, the Christian Science Monitor, and Agence France Presse, and has covered the conflict in Iraq, the Arab Spring uprisings, and Libya. The Wall Street Journal nominated Dagher's work from Syria for the Pulitzer Prize and other journalism awards.
A New York Times Book Review Editor's Choice PickThe Economist Bets Books of the YearThe Guardian Best Books of 2019Kirkus's Best Nonfiction Books of 2019

"A moving and insightful account of the Syrian civil war."—Yuval Noah Harari, The Guardian

"A vivid and powerful
account of the roots and course of the conflict, setting it in the context of
Assad's personal history and approach to power."—Washington Post

"Dagher draws on
history, interviews and his own experience as a reporter in Syria to depict an
utterly ruthless regime."—The New York Times Book Review, Editor's Choice

"[An] impressively detailed account"—The Guardian US

"Sam Dagher's book Assad or We Burn the Country is a vivid and at times gruelling account of the suppression of the Syrian resistance...It is a powerful testimony of a war correspondent for the Wall Street Journal. His account carries the outrage and passion of a witness to atrocity."—Financial Times

"He was briefly held by pro-regime militiamen in an underground prison and was summarily expelled by the Mukhabarat in 2014. This gives his description of events a credibility lacking in many other accounts."—Patrick Cockburn, New York Times Book Review

"An important addition to the existing literature on the Middle East - especially Syria - by an astute Middle East watcher...It is absolutely indispensable to understand current Middle Eastern and Syrian situation."—The Washington Book Review

"An excellent book on the situation in Syria."—Former US National Security Adviser H. R.McMaster

"As with so much of Dagher's writing, what's striking about the book is it doesn't just confirm the worst that's been reported about Assad's regime in the much-maligned "mainstream media;" it unearths new ways in which the horror and criminality are in fact more terrible than previously understood."—Alex Rowell, Al-Jumhuriya

"Drawing on years of reporting and interviews with those at the top of the Syrian regime, Sam Dagher's book is one that readers won't be able to put down."—Kerry Breen, TODAY Show

"As the only Western reporter based in Damascus during the early years of the civil war, Dagher has a rich perspective on the inner machinations of the regime of Bashar al Assad. In this important book, he lays out in grim detail the staggering cynicism and ruthless brutality of the Assad family. In doing so, he provides readers with a timely description of the dynasty that precipitated the destruction of a nation."—Clarissa Ward, Chief International Correspondent, CNN International

"In this gripping narrative of the inner workings of the Assad regime, Dagher delivers a stunning portrait of the ruthlessness and brutality at the heart of the family that has dominated Syria for fifty years. Captivating in its detailed, first-person accounts from key figures inside Syria's corridors of power, his is the most complete and compelling account to date of Bashar's unlikely rise to power, and the relentless violence he has unleashed since 2011 to preserve his iron grip over the country. Essential reading from a noted journalist and one of the world's best-informed Syria watchers."—Steven Heydemann, Janet W. Ketcham 1953 Professor of Middle East Studies and Director of the Middle East Studies Program at Smith College

"The Syrian uprising has been one of the most consequential events in our new century-it has changed the world. Sam Dagher has been reporting from the heart of the crisis. His book, told through the eyes of two important Syrian insiders, a human rights activist and a former Brigadier General of the Syrian Republican Guard, is a vivid description of the crisis as it unfolded over the past 8 years. It is a must read for anyone who seeks to understand the complex world we are living in."—Dr. Zaher Sahloul, Syrian American doctor and President of MedGlobal

"A riveting chronicle from a courageous journalist who was there to witness and report the truth. A book that should deservedly garner significant award attention."—Kirkus, starred review