The Life of Elizabeth I (Paperback) 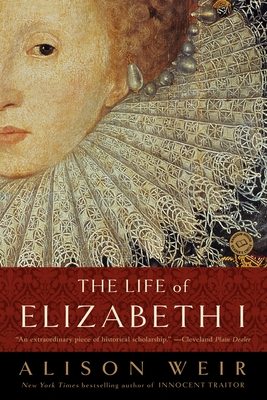 The Life of Elizabeth I (Paperback)


Not On Our Shelves—Ships in 1-5 Days
NEW YORK TIMES BESTSELLER • An intimate, captivating portrait of Queen Elizabeth I that brings the enigmatic ruler to vivid life, from acclaimed biographer Alison Weir

Perhaps the most influential sovereign England has ever known, Queen Elizabeth I remained an extremely private person throughout her reign, keeping her own counsel and sharing secrets with no one—not even her closest, most trusted advisers. Now, in this brilliantly researched, fascinating chronicle, Alison Weir shares provocative new interpretations and fresh insights on this enigmatic figure.

Against a lavish backdrop of pageantry and passion, intrigue and war, Weir dispels the myths surrounding Elizabeth I and examines the contradictions of her character. Elizabeth I loved the Earl of Leicester, but did she conspire to murder his wife? She called herself the Virgin Queen, but how chaste was she through dozens of liaisons? She never married—was her choice to remain single tied to the chilling fate of her mother, Anne Boleyn?

An enthralling epic, The Life of Elizabeth I is a mesmerizing, stunning chronicle of a trailblazing monarch.
Alison Weir is the author of Britain's Royal Families: The Complete Genealogy, The Six Wives of Henry VIII, The Princes in the Tower, The Wars of the Roses, and The Children of Henry VIII. She lives outside London with her husband and two children.
“A riveting portrait of the queen and how the private woman won her public role.”—Kirkus Reviews (starred review)

“An excellent account of the greatest of England’s remarkably great queens.”—Daily Telegraph (London)

“Weir succeeds in making Elizabeth and her subjects come to life in this clearly written and well-researched biography.”—Library Journal (starred review)