The Devil's Cave: A Mystery of the French Countryside (Bruno, Chief of Police Series #5) (Paperback) 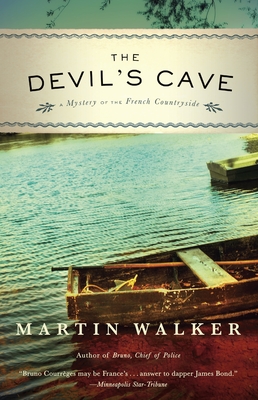 The Devil's Cave: A Mystery of the French Countryside (Bruno, Chief of Police Series #5) (Paperback)

This is book number 5 in the Bruno, Chief of Police Series series.

Another delightful installment in the internationally acclaimed series: It's spring in St. Denis. The village choir is preparing for its Easter concert, the wildflowers are blooming, and among the lazy whorls of the river a dead woman is found floating in a boat. This means another case for Bruno, the town’s cherished chief of police.

With the discovery of sinister markings and black candles near the body, it seems to Bruno that the occult might be involved. And as questions mount—most notably about a troubling real estate proposal in the region and the sudden reappearance of an elderly countess—Bruno and his colleagues are drawn ever closer to a climactic showdown in the Gouffre de Colombac: the place locals call the Devil’s Cave.

Martin Walker is senior director of the Global Business Policy Council, a private think tank for CEOs of major corporations, based in Washington, D.C. He is also editor-in-chief emeritus and international affairs columnist at United Press International. His four previous novels in the Bruno series are Bruno, Chief of Police; The Dark Vineyard; Black Diamond; and The Crowded Grave, all international best sellers. He lives in Washington, D.C., and the Dordogne.
“Bruno Courrèges may be France’s . . . answer to dapper James Bond.”
—The Minneapolis Star-Tribune

“Sensational . . . Gives Walker more opportunity to play tour guide, leading us through the checkered history of this astonishing region.”
—The New York Times

“Bruno Courrèges is a wonderful breath of fresh air in a world of bent cops with whiskey noses, dubious attitudes and principles. . . . A terrific addition to a compelling series.”
—The New York Journal of Books

“The Devil’s Cave brings to life a pastoral setting where the gourmet menu is as spicy as the sex, and where readers can share in the timeless beauty of the French countryside, laced with a little murder.”
—BookPage

“Another tasty read.”
—The Decatur Daily

“A series that is maturing as richly as the wines and cheeses that grace its pages.”
—Reviewingtheevidence.com

“Charming. . . . Bruno, an affable gourmet and dogged investigator, is a winning lead, and Walker perfectly balances developments in his private life with the homicide inquiry.”
—Publishers Weekly

“An affordable way to have an adventure in the French countryside this summer. . . . Strikes a captivating balance between suspense and delight.”
—The Washingtonian