The Resistance Man: A Mystery of the French Countryside (Bruno, Chief of Police Series #6) (Paperback) 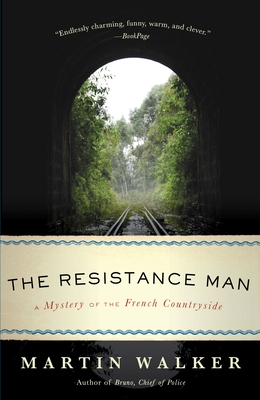 The Resistance Man: A Mystery of the French Countryside (Bruno, Chief of Police Series #6) (Paperback)

This is book number 6 in the Bruno, Chief of Police Series series.

Another delightful installment in the internationally acclaimed series featuring Chief of Police Bruno.

It's summer in St. Denis for chief of police Bruno Courrèges, and that means a new season of cases. This time there are three weighing on his mind. First, there’s the evidence that a veteran of the French Resistance is connected to a notorious train robbery; then, the burglary of a former British spymaster's estate; and, finally, the murder of an antiques dealer whose lover is conveniently on the lam.

As Bruno investigates, it becomes clear that they are connected--however, figuring out how will take every skill he possesses. Add in juggling the complex affections of two powerful women, maneuvering village politics, and managing his irrepressible puppy, Balzac, and Bruno has his hands full once again.

Martin Walker is a senior fellow of the Global Business Policy Council, a private think tank for CEOs of major corporations, based in Washington, D.C. He is also editor in chief emeritus and international affairs columnist at United Press International. His five previous novels in the Bruno series are Bruno, Chief of Police; The Dark Vineyard; Black Diamond; The Crowded Grave; and The Devil’s Cave, all international best sellers. He lives in Washington, D.C., and the Dordogne.

“Engaging. . . . This is not the first Bruno mystery, and it certainly should not be the last.”
—The Washington Times

“What’s not to like? . . . Don’t be surprised if you come away from this book with a hankering to read another six or seven [Bruno] novels.” —New York Journal of Books

“A passionate valentine to the splendors of the slow life.” —Washington Independent Review of Books

“While most readers think the British have a line on cozies, Walker makes a great case for the French version. . . . [An] appetizing mystery.” —Booklist

“Evokes all the history, culture, romance and fine food and drink you might expect of French village life.” —BookPage

“An exemplary entry in the police procedural.” —Bookgasm