Belichick: The Making of the Greatest Football Coach of All Time (Paperback) 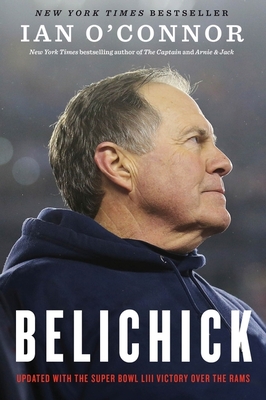 Belichick: The Making of the Greatest Football Coach of All Time (Paperback)


Not On Our Shelves—Ships in 1-5 Days
The definitive biography of the NFL’s most enigmatic, controversial, and yet successful coach

Bill Belichick is perhaps the most fascinating figure in the NFL—the infamously dour face of one of the winningest franchises in sports. As head coach of the New England Patriots, he’s led the team to five Super Bowl championship trophies. In this revelatory and robust biography, readers will come to understand and see Belichick’s full life in football, from watching college games as a kid with his father, a Naval Academy scout, to orchestrating two Super Bowl–winning game plans as defensive coordinator for the Giants, to his dramatic leap to New England, where he has made history.

Award-winning columnist and New York Times best-selling author Ian O’Connor delves into the mind of the man who has earned a place among coaching legends like Lombardi, Halas, and Paul Brown, presenting sides of Belichick that have been previously unexplored. O’Connor discovers how this legendary coach shaped the people he met and worked with in ways perhaps even Belichick himself doesn’t know. Those who follow and love pro football know Bill Belichick only as the hooded genius of the Patriots. But there is so much more—from the hidden tensions and deep layers to his relationship with Tom Brady to his sometimes frosty dealings with owner Robert Kraft to his ability to earn the unmitigated respect of his players—if not their affection. This is a man who has many facets and, ultimately, has created a notorious football dynasty. Based on exhaustive research and countless interviews, this book circles around Belichick to tell his full story for the first time, and presents an incisive portrait of a mastermind at work.
IAN O’CONNOR is a senior writer at ESPN.com, a nationally-acclaimed columnist, and the author of four books, including the New York Times bestsellers Arnie & Jackand The Captain: The Journey of Derek Jeter. He has finished in first place in over a dozen national writing contests.,

“With deep reporting and a profound understanding of the football life, Ian O'Connor comes as close as humanly possible to solving the mystery of the great football sphinx, Bill Belichick, and his unmatched coaching career.” – David Maraniss, best-selling author of When Pride Still Mattered, A Life of Vince Lombardi     "I thought I knew everything there is to know about the brilliant, secretive coach. The Hoodie would have made a model Prisoner of War. He gives up nothing. And yet Ian O'Connor somehow cracked the code at Fort Foxborough, producing this compelling portrait of the coach and the man. A must-read for football buffs and anyone who appreciates leadership.'' – Dan Shaughnessy, Boston Globe columnist and best-selling author of Francona (with Terry Francona)    “In Belichick, Ian O’Connor has delivered an excess of compelling, fresh reporting and muscled writing to construct one of our great coaching biographies. O’Connor illuminates one of sports’ most secretive and mysterious figures.  Fast-moving, exhaustively researched, Belichick will transform the way you consider the man and the Patriots' dynasty.” – Adrian Wojnarowski, ESPN Senior Writer and best-selling author of The Miracle of St. Anthony   "A tour de force of world-class reporting and masterful, fair-minded storytelling." – Armen Keteyian, contributing correspondent to 60 Minutes and best-selling author of Tiger Woods     "It is simply not possible to produce a more interesting, informative and beautifully written biography than Ian O'Connor has in Belichick...This is the kind of gold-standard reporting that all journalists aspire to, and few actually achieve." – Mike Vaccaro, award-winning columnist, New York Post   "A valuable portrayal of both the public and private sides of the NFL’s leading coach for the past 20 years that will be in demand among sports collections." – Library Journal, starred review   "A fascinating look inside the team so many of us love to hate." – Washington Post   "Ian O’Connor’s biography ranks among the best in regards to the NFL . . . A comprehensive profile that manages to dig deep under Belichick’s famous hoodie . . . fascinating . . . This is an important biography, as O’Connor provides a greater understanding of arguably the greatest NFL coach of all time." – Chicago Tribune —