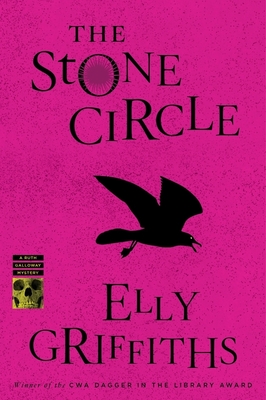 This is book number 11 in the Ruth Galloway Mysteries series.

In this delightfully creepy mystery, Ruth Galloway—whom #1 New York Times bestselling author Louise Penny calls “a captivating amateur sleuth”—is haunted by a ghost from her past, just as her future lands on shaky ground. ¶ “Its patented combination of mysterious circumstances, police procedure, and agonizing relationship problems will keep you reading, and feeling, all night.” —Kirkus Reviews (starred review) ¶ Ruth’s partner in crime, DCI Nelson, has been receiving threatening letters. They are anonymous, yet reminiscent of ones he has received in the past, from the person who drew him into a case that’s haunted him for years. At the same time, Ruth receives a letter purporting to be from that very same person—her former mentor, and the reason she first started working with Nelson. But the author of those letters is dead. Or is he? The past is reaching out for Ruth and Nelson, and its grip is deadly.
ELLY GRIFFITHS is the author of the Ruth Galloway and Brighton mystery series, as well as the standalone novels The Stranger Diaries, winner of the Edgar Award for Best Novel, and The Postscript Murders. She is the recipient of the CWA Dagger in the Library Award and the Mary Higgins Clark Award. She lives in Brighton, England.

"This superb series (The Dark Angel, 2018, etc.) never disappoints. Its patented combination of mysterious circumstances, police procedure, and agonizing relationship problems will keep you reading, and feeling, all night." —Kirkus, STARRED review    "Enticing...fans of forensic mysteries will find plenty to like." —Publishers Weekly —