Return To The Reich: A Holocaust Refugee's Secret Mission to Defeat the Nazis (Paperback) 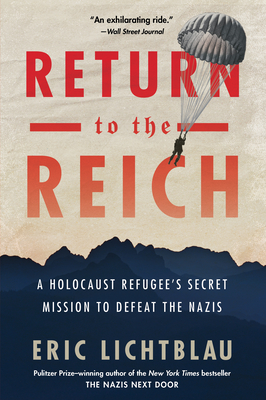 Return To The Reich: A Holocaust Refugee's Secret Mission to Defeat the Nazis (Paperback)


Not On Our Shelves—Ships in 1-5 Days
The remarkable story of Fred Mayer, a German-born Jew who escaped Nazi Germany only to return as an American commando on a secret mission behind enemy lines

Growing up in Germany, Freddy Mayer witnessed the Nazis’ rise to power. When he was sixteen, his family made the decision to flee to the United States—they were among the last German Jews to escape, in 1938.

In America, Freddy tried enlisting the day after Pearl Harbor, only to be rejected as an “enemy alien” because he was German. He was soon recruited to the OSS, the country’s first spy outfit before the CIA. Freddy, joined by Dutch Jewish refugee Hans Wynberg and Nazi defector Franz Weber, parachuted into Austria as the leader of Operation Greenup, meant to deter Hitler’s last stand. He posed as a Nazi officer and a French POW for months, dispatching reports to the OSS via Hans, holed up with a radio in a nearby attic. The reports contained a gold mine of information, provided key intelligence about the Battle of the Bulge, and allowed the Allies to bomb twenty Nazi trains. On the verge of the Allied victory, Freddy was captured by the Gestapo and tortured and waterboarded for days. Remarkably, he persuaded the region’s Nazi commander to surrender, completing one of the most successful OSS missions of the war.

Based on years of research and interviews with Mayer himself, whom the author was able to meet only months before his death at the age of ninety-four, Return to the Reich is an eye-opening, unforgettable narrative of World War II heroism.

ERIC LICHTBLAU, a two-time Pulitzer Prize–winning journalist, is the best-selling author of The Nazis Next Door and Bush’s Law: The Remaking of American Justice. He was a Washington reporter for the New York Times for fifteen years, while also writing for the Los Angeles Times, The New Yorker, TIME, and other publications. He has been a frequent guest on NPR, MSNBC, C-SPAN, and other networks, as well as a speaker at many universities and institutions. He lives outside Washington, D.C.

“Return to the Reich is a mesmerizing piece of historical reportage. Not a word wasted, every page worth turning in this beautifully written account of one of the most daring and successful secret missions of WWII. This is a masterful account by a fantastically talented writer.” —Alex Kershaw, New York Times bestselling author of The Liberator and The Longest Winter   “Eric Lichtblau’s absorbing narrative reads like a spy novel; he captures a sense of working and living undercover, from the strains of secretly building support for the intelligence mission, to the thrills of succeeding against the Nazi regime while living among its supporters. This recounting of the work of two Jewish refugees from Hitler’s Europe fighting against the horrors of Nazi Germany is as much a lesson for today as it is a tale of their astonishing experiences.” —Margaret Henoch, retired CIA senior chief of station    “At a time of national division, Freddy Mayer is the hero we so desperately need to remember and celebrate. In Return to the Reich, Eric Lichtblau has discovered a riveting story of the boundless courage of an ordinary man who became extraordinary at a time when the world was on fire. One of America’s great reporters takes us back to a gripping chapter of World War II that Hollywood has somehow missed. Tom Hanks, call your agent.” —James Risen, author of Pay Any Price: Greed, Power, and Endless War   “Recounting one of the most successful espionage missions, Lichtblau delivers the goods, shining a bright spotlight on a truly unique character: Mayer was aggressive, ingenious, and often disregarded the rules, to great effect. An enthralling page-turner.” —Kirkus Reviews, starred review   “An extremely accessible read, this well-researched book will appeal to fans of espionage tales, World War II history, biographies, as well as young adult audiences.” —Library Journal, starred review   “Gripping . . . Readers will devour Lichtblau’s fresh and masterfully told WWII story.” —Publishers Weekly   "Readers are launched on an exhilarating ride . . . Details pop and characters vividly spring alive . . . Freddy Mayer is an irresistible subject, and he deserves a dozen more recountings of his adventures.” —Wall Street Journal —