The Last Folk Hero: The Life and Myth of Bo Jackson (Hardcover) 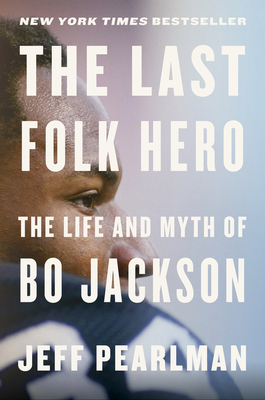 The Last Folk Hero: The Life and Myth of Bo Jackson (Hardcover)

“A legendary tome on a legendary athlete." —Chris Herring, author of Blood in the Garden

From the mid-1980s into the early 1990s, the greatest athlete of all time streaked across American sports and popular culture. Stadiums struggled to contain him. Clocks failed to capture his speed. His strength was legendary. His power unmatched. Video game makers turned him into an invincible character—and they were dead-on. He climbed (and walked across) walls, splintered baseball bats over his knee, turned oncoming tacklers into ground meat. He became the first person to simultaneously star in two major professional sports, and overtook Michael Jordan as America’s most recognizable pitchman. He was on our televisions, in our magazines, plastered across billboards. He was half man, half myth.

Then, almost overnight, he was gone.

He was Bo Jackson.

Drawing on an astonishing 720 original interviews, New York Times bestselling sportswriter Jeff Pearlman captures as never before the elusive truth about Jackson, Auburn University’s transcendent Heisman Trophy winner, superstar of both the NFL and Major League Baseball and ubiquitous “Bo Knows” Nike pitchman. Did Bo really jump over a parked Volkswagen? (Yes.) Did he actually run a 4.13 40? (Yes.) During the 1991 flight that nearly killed every member of the Chicago White Sox, was he in the cockpit trying to help? (Oddly, yes. Or no. Or … maybe.)

He’s not Deion Sanders, either.

No, Bo Jackson is Paul Bunyan.

The Last Folk Hero is the true tale of Bo Jackson that only “master storyteller” (NPR.org) Jeff Pearlman could tell.

JEFF PEARLMAN is the New York Times best-selling author of eight books, including Football for a Buck,The Bad Guys Won!, Boys Will Be Boys, Showtime, Sweetness, and Gunslinger. He lives in Southern California with his wife, Catherine, and children, Casey and Emmett. He is the host of the Two Writers Slinging Yang podcast and blogs regularly at jeffpearlman.com.

"It's just not possible to write a better biography than The Last Folk Hero, which is Jeff Pearlman's best book yet. And that's saying something." — New York Post

“A tremendous book, impossible to put down, one of the most well-reported books I ever remember reading." — Peter King

"Bo Jackson awed fans with the impossible. The sensational, two-sport, baseball and football superstar has a highlights reel packed with moonshot homers, crazy throws, unstoppable touchdown runs and iconic Nike ads. If you grew up in the 1980s and ‘90s, you probably wanted to be like Bo. In The Last Folk Hero, Jeff Pearlman shows us how Vincent Jackson became 'Bo' with engrossing reporting that takes us from his early childhood to his athletic apex to that fluke, career-changing injury. Along the way, Pearlman unpacks the real story from the embellishments and myths that seem to grow in each retelling." — NPR.org

“A legendary tome on a legendary athlete that was almost too good to be true. Pearlman's research takes us into Bo's cramped childhood home, inside his elementary school classrooms and onto the first muddy fields he ever played on. And in doing so, he gets us closer than we've ever gotten to the truth of who Jackson really was, and how he got to be that way. The book is appointment reading; an undeniable masterclass.” — Chris Herring, New York Times best-selling author of Blood in the Garden: The Flagrant History of the 1990s New York Knicks

"As Jeff Pearlman depicts Bo Jackson's life, from neighborhoods in Bessemer to charter jets in Memphis, you begin to wonder whether Pearlman contacted every human being who has ever interacted with Jackson. That's how detailed this book is on a life seemingly so hard to depict. Former classmates, agents, teammates, attorneys and so many others provide an array of vignettes that distinctly portray the human arc of one of sport's most mythical figures." — Alec Lewis, Kansas City Royals beat writer, The Athletic

"Every word was devoured like cornbread and collard greens at a family reunion. Pearlman's beautiful and brilliant work here takes you deep inside the life of America's greatest athlete of all time, but there is so much more to this book. As a child of Birmingham, Alabama, who fell in love with sports in the 1980s thanks to Bo Jackson, I consider this one of the greatest sports biographies ever written." — Joseph Goodman, author of We Want Bama

“A standout addition to biographies of hall-of-fame athletes. Jackson’s fans are in for a treat.” — Publishers Weekly

“Far more than a typical sports biography. [The Last Folk Hero] is a complete portrait of an extraordinary athlete and a man with an enduring charisma, as well as a vivid account of the changing social and sports landscapes in which he played. In short, it is an undeniable masterpiece.” — Bookreporter.com

“Every sports book by Jeff Pearlman is a must-read… Pearlman writes as only a great storyteller can – witty, funny, informative, and always insightful. [The Last Folk Hero] is quite simply a joy, as entertaining and enjoyable a sports book as you will find.” — All Sports Book Reviews

"Pearlman tells us everything there is to know about the two-sport star." — Andscape/ESPN

"This is a giant book, thoroughly detailed. ... Pearlman has such a lively, conversational style that reading was not a slog, and the story is nearly unbelievable." — The Tuscaloosa News