The Sediments Of Time: My Lifelong Search for the Past (Paperback) 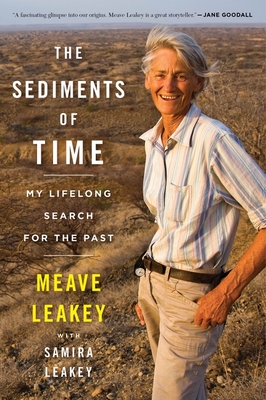 The Sediments Of Time: My Lifelong Search for the Past (Paperback)


On Our Shelves Now at:
Meave Leakey’s thrilling, high-stakes memoir—written with her daughter Samira—encapsulates her distinguished life and career on the front lines of the hunt for our human origins, a quest made all the more notable by her stature as a woman in a highly competitive, male-dominated field.

In The Sediments of Time, preeminent paleoanthropologist Meave Leakey brings us along on her remarkable journey to reveal the diversity of our early prehuman ancestors and how past climate change drove their evolution. She offers a fresh account of our past, as recent breakthroughs have allowed new analysis of her team’s fossil findings and vastly expanded our understanding of our ancestors.

Meave’s personal story is replete with drama, from thrilling discoveries on the shores of Lake Turkana—including the 3.5-million-year-old skull of the flat-faced man from Kenya, representing an important new branch of the human family—to run-ins with armed herders and every manner of wildlife, to raising her children and supporting her renowned paleoanthropologist husband Richard Leakey’s ambitions amidst social and political strife in Kenya. When Richard needs a kidney, Meave provides him with hers, and when he asks her to assume the reins of their field expeditions after he loses both legs in a plane crash, Meave steps in.

The Sediments of Time is the summation of a lifetime of Meave Leakey’s efforts: it is a compelling picture of our human origins and climate change, as well as a high-stakes story of ambition, struggle, and hope.

“A fascinating glimpse into our origins. Meave Leakey is a great storyteller, and she presents new information about the far-off time when we emerged from our apelike ancestors to start the long journey that has led to our becoming the dominant species on Earth. That story, woven into her own journey of research and discovery, gives us a book that is informative and captivating, one that you will not forget.”
—Jane Goodall, PhD, DBE, founder of the Jane Goodall Institute
MEAVE LEAKEY currently coheads the significant field efforts in northern Kenya, started nearly a century ago by Louis and Mary Leakey, seeking the fossil records to the roots of humankind. She has worked at the National Museums of Kenya since 1969, including as the head of the paleontology department, and is a research professor at Stony Brook University, New York. She is the recipient of several honorary degrees, has been elected an honorary fellow of the Geological Society of London, inducted into the National Academy of Sciences in Washington, DC, was a National Geographic explorer-in-residence, served as a fellow of the African Academy of Sciences, and received the National Geographic Society Hubbard Medal, among many other accolades and achievements. She is also an author of numerous groundbreaking scientific publications in prestigious journals and of several monographs documenting her research.

SAMIRA LEAKEY obtained a BA in politics with first-class honours from the School of Oriental and African Studies at the University of London and a master’s degree in public administration from Princeton University. Samira worked at the World Bank in Washington, DC, and now lives in Nairobi with her daughter.

A New York Times Editors' Choice  One of A Mighty Girl's 2020 Books of the Year   "In a field of celebrity scientists, nobody shines brighter than Meave Leakey. She was once the scion, and is now matriarch, of the Leakey dynasty, three generations of paleoanthropological royalty...[She] tells her extraordinary life story in The Sediments of Time: My Lifelong Search for the Past. Co-written with her youngest daughter, Samira, this inspirational autobiography stands among the finest scientist memoirs." —New York Times Book Review   "An excellent overview of how we know what we know about human evolution . . . Meave Leakey is a real-life Indiana Jones. Her life has been filled with adventure, struggle, and discovery after amazing discovery that are detailed in her riveting autobiography, The Sediments of Time." —Forbes   "The Sediments of Time is a fascinating glimpse into our origins. Meave Leakey is a great storyteller, and she presents new information about the far off time when we emerged from our ape-like ancestors to start the long journey that has led to our becoming the dominant species on Earth. That story, woven into her own journey of research and discovery, gives us a book that is informative and captivating, one that you will not forget." —Jane Goodall, PhD, DBE, Founder of the Jane Goodall Institute   “An exciting and richly informative scientist’s autobiography…This major work of scientific dedication and original insight illuminates both our distant past and our current, serious, human-caused planetary challenges.” —Booklist Review *starred*   “Attentive readers of Meave Leakey’s masterful memoir, The Sediments of Time, will learn a few details about her personal life....But the main and most illuminating parts of [the book] are about the tedious, painstaking years spent hunting for the fossilized remains of our species’ precursors. Drawing on field notes, interviews and research papers, Meave recounts the work that led to some of her and her team’s greatest discoveries....Meave and her co-writer, her youngest daughter Samira Leakey, write clearly and compellingly about what these discoveries mean...A thrilling account.” —BookPage *starred*   "For over 50 years, British-born palaeoanthropologist Meave Leakey has been unearthing fossils of our early ancestors in Kenya’s Turkana Basin. Her discoveries have changed how we think about our origins. Instead of a tidy ape-to-human progression, her work suggests different pre-human species living simultaneously. Leakey’s new memoir, The Sediments of Time: My Lifelong Search for the Past, co-written with her daughter Samira, reflects on her life in science and pieces together what we now understand about the climate-driven evolution of our species." —Guardian   “An engaging memoir...A marvelous account of what it is like for a celebrated scientist to take on some of the most vital and vexing questions regarding human origins and to come up with biocultural answers.” —Science   “Meave describes a life that many readers will envy. Her discoveries, often after numbingly tedious work in a brutal climate, added new species to our family tree, teased out more information about existing ancestors, and increased our knowledge of how evolution, geology, and climate change gave rise to modern humans. She is not shy about explaining all this....An illuminating mem —