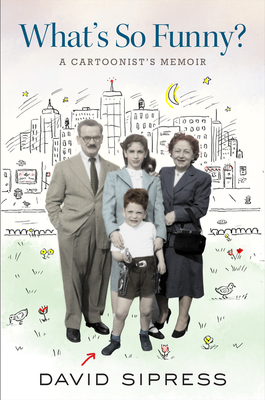 “David Sipress’s engaging, illuminating, and hilarious memoir will perhaps clarify what dark forces are at work when it comes to becoming a cartoonist rather than a podiatrist, a billionaire tech mogul, or someone who is deeply into collecting owl figurines. And if it doesn’t, you will love it anyway.”— Roz Chast

From a longtime New Yorker staff cartoonist, an evocative family memoir, a love letter to New York City, and a delightful exploration of the origins of creativity—richly interleaved with the author’s witty, beloved cartoons.

David Sipress, a dreamer and obsessive drawer living with his Upper West Side family in the age of JFK and Sputnik, goes hazy when it comes to the ceaselessly imparted lessons-on-life from his meticulous father and the angsty expectations of his migraine-prone mother.  With wry and brilliantly observed prose, Sipress paints his hapless place in the family, from the time he is tricked by his unreliable older sister into rocketing his pet turtle out his twelfth-floor bedroom window to the moment he walks away from a Harvard PhD program in Russian history to begin his life as a professional cartoonist. Sipress’s cartoons appear in the story with spot-on precision, inducing delightful Aha! moments in answer to the perennial question aimed at cartoonists: Where do you get your ideas?

DAVID SIPRESS has been staff cartoonist since 1998 for The New Yorker, where he has published nearly 700 cartoons. He lectures widely on cartooning, and his autobiographical writing has appeared frequently on newyorker.com.

“[H]is cartoons act more as punctuation marks to the narrative, written in prose that is also economical and amiable (and occasionally devastating)…It’s an endearingly vulnerable tale of being molded by one’s family of origin, then crawling out from under its suffocating weight.”
— New York Times

"David Sipress, one of the most brilliant cartoonists in the history of The New Yorker, has written a beautiful memoir, equally moving and hilarious. It’s like spending time with the funniest and kindest person you’ve ever met.”
— Andy Borowitz, New York Times bestselling author of The Borowitz Report

“Cartooning is a serious business, as David Sipress reminds in this engaging and frequently moving memoir. Sipress has not only crafted a winning self-portrait of the artist, he also writes about his complicated family life with deep affection and unsparing honesty. What’s So Funny? will make you laugh, and it will break your heart, and it comes with lots of Sipress’s cartoons too, which are worth the price of admission in and of themselves.”
— Tom Perrotta, author of Election and Little Children

"An affectionate, introspective memoir from the acclaimed cartoonist...In crisp, clean, anecdotal prose, [Sipress] chronicles his life story, his mischievous cartooning, and the germination of his ideas, with many included for readers to appreciate...This addictive, witty, David Sedaris–esque story is a hoot." — Kirkus Reviews (starred review)

“Sipress draws on his gift for evoking the predicaments of human nature to tell beguiling stories about his life and career…a delightful jaunt through an inspiring artist’s mind.” — Publishers Weekly

"David Sipress's engaging, illuminating, and hilarious memoir will perhaps clarify what dark forces are at work when it comes to becoming a cartoonist rather than a podiatrist, a billionaire tech mogul, or someone who is deeply into collecting owl figurines. And if it doesn't, you will love it anyway.”

— Roz Chast, author of Can’t We Talk About Something More Pleasant?

“This droll, emotionally bare memoir by the longtime New Yorker cartoonist is a master class in how artists can use their personal lives to fortify their work.” — Shelf Awareness

"[Sipress' cartoons] make you cringe and chuckle all at once." — Boston.com