Malachi's Message to the Men of Today: A Bible Study of Old Testament Prophecy (Paperback) 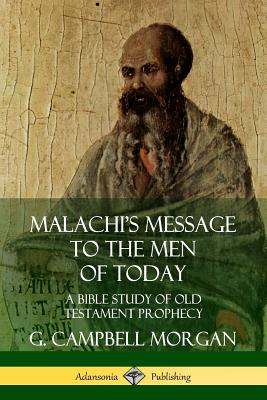 Malachi's Message to the Men of Today: A Bible Study of Old Testament Prophecy (Paperback)


Not On Our Shelves—Ships in 1-5 Days
(This book cannot be returned.)
G. Campbell Morgan offers commentary upon the Book of Malachi, detailing its wisdom, spiritual advice, and relevance to the modern Christian. Closely examining the text, Morgan explains the key elements of Malachi's prophecy, mentioning his belief early in his narrative that the value of Malachi's words are greater in the modern day than ever before. Justifying this claim, Morgan examines the time in which Malachi made his predictions, and demonstrates how these have been shown as correct in later literature and echoed in other prophecies. Traversing the scriptures with his signature fluency, Morgan conducts a verse-by-verse analysis of Malachi. Cross-referencing these with other passages of the Bible, in both the Old and New Testaments, the author passionately makes the case that Malachi is an underappreciated prophet whose words resonate throughout scripture and time.