Evidence and the Archive: Ethics, Aesthetics and Emotion (Paperback) 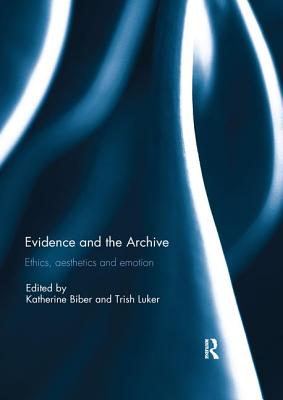 Evidence and the Archive: Ethics, Aesthetics and Emotion (Paperback)

This collection explores the stakes, risks and opportunities invoked in opening and exploring law's archive and re-examining law's evidence. It draws together work exploring how evidence is used or mis-used during the legal process, and re-used after the law's work has concluded by engaging with ethical, aesthetic or emotional dimensions of using law's evidence. Within socio-legal discourse, the move towards 'open justice' has emerged concurrently with a much broader cultural sensibility, one that has been called the archival turn (Ann Laura Stoler), the archival impulse (Hal Foster) and archive fever (Jacques Derrida). Whilst these terms do not describe exactly the same phenomena, they collectively acknowledge the process by which we create a fetish of the stored document. The archive facilitates our material confrontation with history, historicity, order, linearity, time and bureaucracy. For lawyers, artists, journalists, publishers, curators and scholars, the document in the archive has the attributes of authenticity, contemporaneity, and the unique tangibility of a real moment captured in material form. These attributes form the basis for the strict interpretive limits imposed by the rules of evidence and procedure. These rules do not contain the other attributes of the archival document, those that make it irresistible as the basis for creative work: beauty, violence, surprise, shame, volume, and the promise that it contains a tantalising secret. This book was previously published as a special issue of Australian Feminist Law Journal.

Katherine Biber is a legal scholar, historian and criminologist and Professor of Law at the University of Technology Sydney. She researches in the field of evidence, criminal procedure, visual culture and documentation. She is author of Captive Images: Race, Crime, Photography (2007) and the forthcoming In Crime's Archive: The Cultural Afterlife of Evidence (2017). She is co-editor of The Lindy Chamberlain Case: Nation, Law, Memory (2009), and an editor of the Oxford Research Encyclopedia of Crime, Media and Popular Culture (forthcoming). Trish Luker is based in the Faculty of Law, University of Technology Sydney. Her research focus is in interdisciplinary studies of law and the humanities, particularly in relation to documentary practices and evidence law. She is a co-editor of Australian Feminist Judgments: Righting and Rewriting Law (2014). She is currently working on a project entitled 'The Court as Archive: Rethinking the Institutional Role of Federal Courts of Record'. During 2016, together with Katherine Biber, she will begin a project entitled 'What is a Document? Evidentiary Challenges in the Digital Age'.