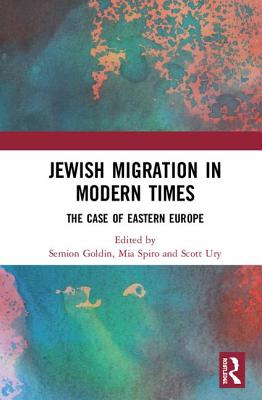 This collection examines various aspects of Jewish migration within, from and to eastern Europe between 1880 and the present. It focuses on not only the wide variety of factors that often influenced the fateful decision to immigrate, but also the personal experience of migration and the critical role of individuals in larger historical processes.

Including contributions by historians and social scientists alongside first-person memoirs, the book analyses the historical experiences of Jewish immigrants, the impact of anti-Jewish violence and government policies on the history of Jewish migration, the reception of Jewish immigrants in a variety of centres in America, Europe and Israel, and the personal dilemmas of those individuals who debated whether or not to embark on their own path of migration.

As such, this collection will be of much interest to not only scholars of Jewish history, but also researchers in the fields of migration studies, as well as those using personal histories as historical sources. This book was originally published as a special issue of East European Jewish Affairs.

Semion Goldin is a Senior Research Fellow at the Leonid Nevzlin Research Center for Russian and East European Jewry at the Hebrew University of Jerusalem, Israel.Mia Spiro is a Lecturer in Jewish Studies in the School of Critical Studies at the University of Glasgow, UK.Scott Ury is a Senior Lecturer in the Department of Jewish History, and Director of the Stephen Roth Institute for the Study of Contemporary Antisemitism and Racism at Tel Aviv University, Israel.