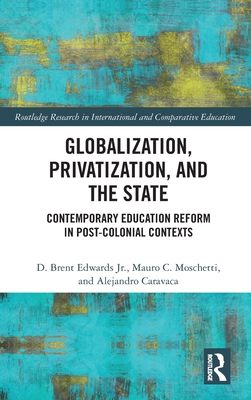 This text explores how the dynamics of globalization and privatization have influenced State policy and impacted education reform in Honduras. It makes the argument that understanding education reform in post-colonial contexts requires that scholars go beyond a surface-level description of such trends as privatization to consider, in addition, the ways that the logics, practices, and relationships that characterized colonialism continue to be embedded in the apparatus of modern States. The first part of the volume documents historical trends and the evolution of privatisation in Honduras, while the second part explicitly engages in an extended discussion of State theory, before shifting to present a framework for depicting how these logics are the foundational layer upon which states and global governance have been constructed. The framework draws upon scholarship from political economy, world systems, and post-colonialism to depict the "ethos of privatization" at the core of post-colonial States, wherein what drives the system is private benefit, in the interest of individuals and their networks, but not in the interest of those outside the State. Applying this unique framework to the case of Honduras and offering empirical analysis of the Honduran education sector, the changing role and priorities of the State, and the increasing involvement of international organizations, NGOs, and private actors in the provision of education, the text increases understanding of how State theory interacts with broader global dynamics to impact education. This text will benefit researchers, academics, and educators with a focus on international and comparative education, policy analysis, globalization, and international development.