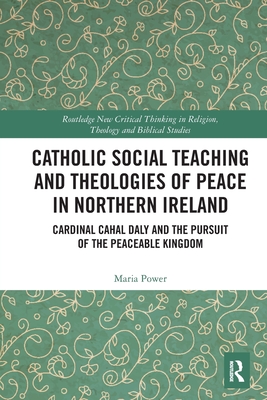 This book investigates the response of the Catholic Church in Northern Ireland to the conflict in the region during the late Twentieth Century. It does so through the prism of the writings of Cardinal Cahal Daly (1917-2009), the only member of the hierarchy to serve as a bishop throughout the entire conflict.

This book uses the prolific writings of Cardinal Daly to create a vision of the 'Peaceable Kingdom' and demonstrate how Catholic social teaching has been used to promote peace, justice and nonviolence. It also explores the public role of the Catholic Church in situations of violence and conflict, as well as the importance for national churches in developing a voice in the public square.Finally, the book offers a reflection on the role of Catholic social teaching in contemporary society and the ways in which the lessons of Northern Ireland can be utilised in a world where structural violence, as evidenced by austerity, and reactions to Brexit in the United Kingdom, is now the norm.

This work challenges and changes the nature of the debate surrounding the role of the Catholic Church in the conflict in Northern Ireland. It will, therefore, be a key resource for scholars of Religious Studies, Catholic Theology, Religion and Violence, Peace Studies, and Twentieth Century History.

Maria Power is a Fellow of Blackfriars Hall, University of Oxford where she is the Director of the Human Dignity Project at the Las Casas Institute for Social Justice.