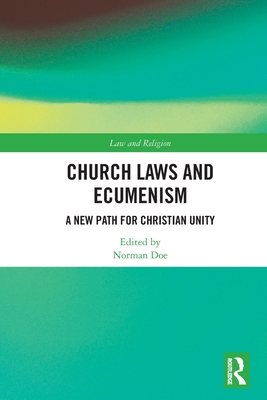 Written by experts from within their communities, this book compares the legal regimes of Christian churches as systems of religious law.

The ecumenical movement, with its historical theological focus, has failed to date to address the role of church law in shaping relations between churches and fostering greater mutual understanding between them. In turn, theologians and jurists from the different traditions have not hitherto worked together on a fully ecumenical appreciation of the potential value of church laws to help, and sometimes to hinder, the achievement of greater Christian unity. This book seeks to correct this ecumenical church law deficit. It takes account of the recent formulation by an ecumenical panel of a Statement of Principles of Christian Law, which has been welcomed by Pope Francis and the Ecumenical Patriarch of Constantinople, leader of the Orthodox Church worldwide, as recognizing the importance of canon law for ecumenical dialogue. This book, therefore, not only provides the fruits of an understanding of church laws within ten Christian traditions, but also critically evaluates the Statement against the laws of these individual ecclesial communities.

The book will be an essential resource for scholars of law and religion, theology, and sociology. It will also be of interest to those working in religious institutions and policy-makers.

Norman Doe is Professor of Law and Director of the Centre for Law and Religion at the Law School, Cardiff University. He has taught and published widely in the field of law and religion, particularly comparative church law. He has been listed in the 'top ten' law and religion scholars worldwide.