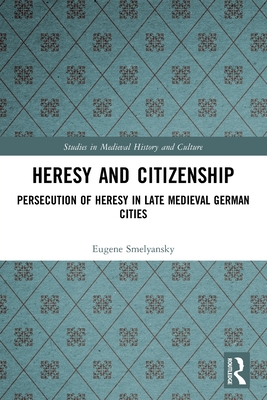 Heresy and Citizenship examines the anti-heretical campaigns in late-medieval Augsburg, Rothenburg ob der Tauber, Strasbourg, and other cities. By focusing on the unprecedented period of persecution between 1390 and 1404, this study demonstrates how heretical presence in cities was exploited in ecclesiastical, political, and social conflicts between the cities and their external rivals, and between urban elites.

These anti-heretical campaigns targeted Waldensians who believed in lay preaching and simplified forms of Christian worship. Groups of individuals identified as Waldensians underwent public penance, execution, or expulsion. In each case, the course and outcome of inquisitions reveal tensions between institutions within each city, most often between city councils and local bishops or archbishops. In such cases, competing sides used the persecution of heresy to assert their authority over others. As a result, persecution of urban Waldensians acquired meaning beyond mere correction of religious error.

By placing the anti-heretical campaigns of this period in their socio-political and religious context, Heresy and Citizenship also engages with studies of social and political conflict in late medieval towns. It examines the role the exclusion of religiously and socially deviant groups played in the development of urban governments, and the rise of ideologies of good citizenship and the common good. It will be of interest to scholars and students interested in medieval urban and religious history, and the history of heresy and its persecution.

Eugene Smelyansky is a Postdoctoral Fellow in the Roots of Contemporary Issues Program at Washington State University. His research interests focus on the history of religious persecution in medieval Europe, and the history of late medieval urban culture, society, and the environment.