Reactions to the Law by Minority Religions (Paperback) 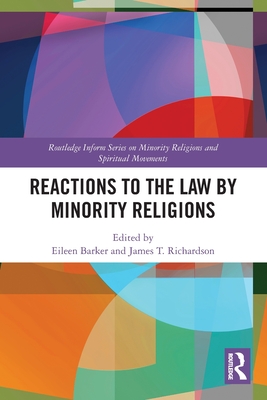 Reactions to the Law by Minority Religions (Paperback)

An international panel of experts offer examples from North America, Europe and Asia demonstrating how religions with relatively little status may resort to violence or passive acceptance of the law; how they may change their beliefs or practices in order to be in compliance with the law; or how they may resort to the law itself in order to change their legal standing, sometimes by forging alliances with those with more power or authority to achieve their goals. The volume concludes by applying theoretical insights from sociological studies of law, religion and social movements to the variety of responses.

Eileen Barker, FBA, FAcSS, OBE, is Professor Emeritus of Sociology at the London School of Economics, UK. She has spent the past five decades studying minority religions and social reactions to them. In 1988 she founded Inform in order to help enquirers with information that is as reliable, balanced, contextualised and up-to-date as possible. She has over 400 scholarly publications and is series editor of the Routledge Inform book series. James T. Richardson is Emeritus Professor of Sociology and Judicial Studies at the University of Nevada, USA. He is a sociologist with legal training and has been researching new religious movements for five decades. He is the author of over a dozen books and over 300 articles in journals and chapters in edited collections. He has been a Fulbright Fellow in the Netherlands and a Rockefeller Scholar at the Bellagio Center in Italy as well as being an invited guest of universities in Europe, Australia and China.