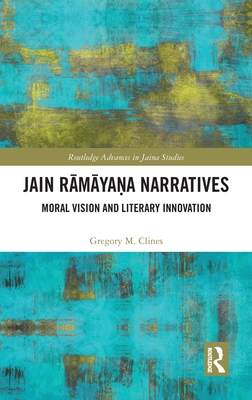 Jain Rāmāyaṇa Narratives: Moral Vision and Literary Innovation traces how and why Jain authors at different points in history rewrote the story of Rāma and situates these texts within larger frameworks of South Asian religious history and literature.

The book argues that the plot, characters, and the very history of Jain Rāma composition itself served as a continual font of inspiration for authors to create and express novel visions of moral personhood. In making this argument, the book examines three versions of the Rāma story composed by two authors, separated in time and space by over 800 years and thousands of miles. The first is Raviṣeṇa, who composed the Sanskrit Padmapurāṇa ("The Deeds of Padma"), and the second is Brahma Jinadāsa, author of both a Sanskrit Padmapurāṇa and a vernacular (bhāṣā) version of the story titled Rām Rās ("The Story of Rām"). While the three compositions narrate the same basic story and work to shape ethical subjects, they do so in different ways and with different visions of what a moral person actually is. A close comparative reading focused on the differences between these three texts reveals the diverse visions of moral personhood held by Jains in premodernity and demonstrates the innovative narrative strategies authors utilized in order to actualize those visions.

The book is thus a valuable contribution to the fields of Jain studies and religion and literature in premodern South Asia.