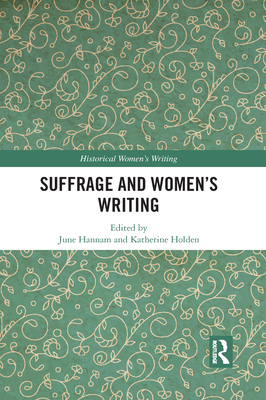 This volume examines different types of women's creative writing in support of the demand for the parliamentary vote, including autobiographies, memoirs, letters, diaries, novels, and drama.

The women's suffrage movement became far more visible in the Edwardian period. Large demonstrations and militant actions such as destruction of property were widely reported in the press and reached a wide audience. Eager to get their message across, suffrage campaigners not only took collective action but also used women's creative talents-whether as artists, musicians, or writers-to win hearts and minds for the cause. Through a close reading of contemporary texts, the chapters in this book reveal the diverse nature of the suffrage movement and its ideas, and the complex relationship between the personal and the political. The contributors also highlight the significance of women's writing as a means to advance the suffrage cause and as a key element of suffrage propaganda.

This book was originally published as a special issue of Women's Writing.