A Detective's Complaint: A Novel (The Lost Detective Trilogy #2) (Paperback) 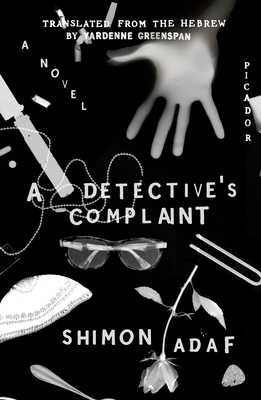 A Detective's Complaint: A Novel (The Lost Detective Trilogy #2) (Paperback)

This is book number 2 in the The Lost Detective Trilogy series.

"In Shimon Adaf's Lost Detective Trilogy, what begins as conventional mystery becomes by degrees a brilliant deconstruction not just of genre but of our own search for meaning. Both profound and compulsively readable, these books demand to be devoured." —Lavie Tidhar, author of By Force Alone

In A Detective's Complaint, the sequel to One Mile and Two Days Before Sunset, Elish Ben Zaken has traded working as a private investigator for writing detective novels based on unsolved cases from the past. He appears to live an ordinary writer’s life: meeting with his agent, attending literary conferences. But all is not quite right with Elish, who cannot escape his past so easily, especially when his sister’s daughter, Tahel, a teenager and an aspiring sleuth herself, calls on him for help. Tahel has uncovered a mystery: a young woman boarded a bus in Beersheva on a Thursday evening and stepped off in Sderot, close to the Gaza border, on Sunday evening. A bus ride that should have lasted an hour instead took three days, and the young woman remembers none of it.

To assist Tahel—and, he tells himself, to conduct research for his next novel—Elish moves back to Sderot, where he grew up. His sister, Yaffa, has moved her family from Tel Aviv to a new lakeside development there; the property came cheap, despite the attractive setting, and there are murmurs that the developer fled the country before it was completed. Some of the houses still stand empty, and Tahel keeps waking up at night to find her mother staring out at the lake, convinced she is being watched.

Now, in the summer of 2014, Sderot lies near the center of the Gaza–Israel conflict, and sirens and missile strikes are part of the town’s daily reality—as are violent clashes between anti-war protestors and those who oppose them. In this pressurized environment, Elish must grapple with the deep wounds of history, both personal and political, and the human need for answers in a world that offers few.

Yardenne Greenspan is a writer and Hebrew translator born in Tel Aviv and based in New York. Her translations have been published by Restless Books, St. Martin’s Press, Akashic, Syracuse University, New Vessel Press, Amazon Crossing, and Farrar, Straus and Giroux. Her translation of Yishai Sarid's novel The Memory Monster was selected as one of The New York Times 100 Notable Books of 2020. Yardenne’s writing and translations have appeared in The New Yorker, Haaretz, Guernica, Literary Hub, Blunderbuss, Apogee, The Massachusetts Review, Asymptote, and Words Without Borders, among other publications. She has an MFA from Columbia University and is a regular contributor to Ploughshares.

"Moving and perceptive . . . The author also has a keen ear for the cacophonous region, which Greenspan conveys in a flavorful translation. This series continues to delight." —Publishers Weekly