Geography Is Destiny: Britain and the World: A 10,000-Year History (Hardcover) 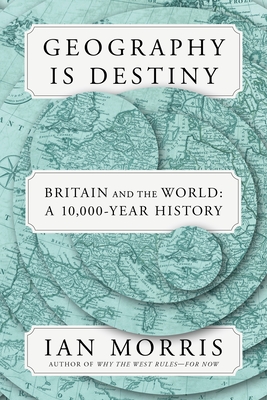 Geography Is Destiny: Britain and the World: A 10,000-Year History (Hardcover)

In the wake of Brexit, Ian Morris chronicles the ten-thousand-year history of Britain's relationship to Europe as it has changed in the context of a globalizing world.

When Britain voted to leave the European Union in 2016, the 48 percent who wanted to stay and the 52 percent who wanted to go each accused the other of stupidity, fraud, and treason. In reality, the Brexit debate merely reran a script written ten thousand years earlier, when the rising seas physically separated the British Isles from the European continent. Ever since, geography has been destiny—yet it is humans who get to decide what that destiny means.

Ian Morris, the critically acclaimed author of Why the West Rules—for Now, describes how technology and organization have steadily enlarged Britain’s arena, and how its people have tried to turn this to their advantage. For the first seventy-five hundred years, the British were never more than bit players at the western edge of a European stage, struggling to find a role among bigger, richer, and more sophisticated continental rivals. By 1500 CE, however, new kinds of ships and governments had turned the European stage into an Atlantic one; with the English Channel now functioning as a barrier, England transformed the British Isles into a United Kingdom that created a worldwide empire. Since 1900, thanks to rapid globalization, Britain has been overshadowed by American, European, and—increasingly—Chinese actors.

In trying to find its place in a global economy, Britain has been looking in all the wrong places. The ten-thousand-year story bracingly chronicled by Geography Is Destiny shows that the great question for the current century is not what to do about Brussels; it’s what to do about Beijing.

Ian Morris is the Jean and Rebecca Willard Professor of Classics and Professor in History at Stanford University and the author of the critically acclaimed Why the West Rules—for Now. He has published many scholarly books and has directed excavations in Greece and Italy. He lives in the Santa Cruz Mountains in California.

"Educative, stimulating, provocative, and more than worthy of engagement . . . Morris provides fascinating details in these pages, and his command of British history is clear." —Andrew Ehrhardt, War on the Rocks

"A treat for the history buff." —Oprah Daily

"[An] extraordinary story . . . At his core task of cramming 10,000 years of history into a single book, Morris succeeds triumphantly." —Robert Colvile, The Times

"Morris provides a very comprehensive history of Britain while keeping readers engaged. It is a skill to cover such a vast timeline and still keep a reader wanting more. A satisfying read for both readers new to British history those looking for a new take." —Library Journal