What It Took to Win: A History of the Democratic Party (Hardcover) 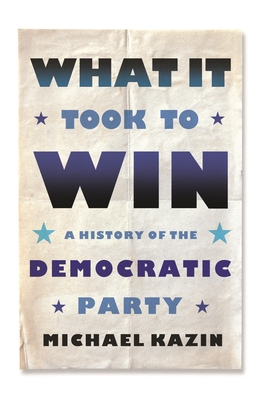 What It Took to Win: A History of the Democratic Party (Hardcover)

A leading historian tells the story of the United States’ most enduring political party and its long, imperfect and newly invigorated quest for “moral capitalism,” from Andrew Jackson to Joseph Biden.

The Democratic Party is the world’s oldest mass political organization. Since its inception in the early nineteenth century, it has played a central role in defining American society, whether it was exercising power or contesting it. But what has the party stood for through the centuries, and how has it managed to succeed in elections and govern?

In What It Took to Win, the eminent historian Michael Kazin identifies and assesses the party’s long-running commitment to creating “moral capitalism”—a system that mixed entrepreneurial freedom with the welfare of workers and consumers. And yet the same party that championed the rights of the white working man also vigorously protected or advanced the causes of slavery, segregation, and Indian removal. As the party evolved towards a more inclusive egalitarian vision, it won durable victories for Americans of all backgrounds. But it also struggled to hold together a majority coalition and advance a persuasive agenda for the use of government.

Kazin traces the party’s fortunes through vivid character sketches of its key thinkers and doers, from Martin Van Buren and William Jennings Bryan to the financier August Belmont and reformers such as Eleanor Roosevelt, Sidney Hillman, and Jesse Jackson. He also explores the records of presidents from Andrew Jackson and Woodrow Wilson to Bill Clinton and Barack Obama. Throughout, Kazin reveals the rich interplay of personality, belief, strategy, and policy that define the life of the party—and outlines the core components of a political endeavor that may allow President Biden and his co-partisans to renew the American experiment.

Michael Kazin is a professor of history at Georgetown University and editor emeritus of Dissent. His books include American Dreamers: How the Left Changed a Nation, The Populist Persuasion, and A Godly Hero: The Life of William Jennings Bryan. He is a member of the American Academy of Arts and Sciences and editor of The Princeton Encyclopedia of American Political History.

"Sweeping . . . Illuminating . . . Kazin provides rich historical context for a longstanding debate about Democratic priorities . . . [He] brings the care of a scholar to a big subject, but he also has a storyteller’s gift for making it accessible." —Janet Hook, Los Angeles Times

"Delightfully distinctive . . . Insights emerge not just from archives but from experience . . . What It Took to Win is expansive, an American history through the prism of the nation’s oldest mass party." —Carlos Lozada, The Washington Post

"Kazin’s account of the party’s history should be essential reading for anyone hoping to chart its future." —Eric Foner, The London Review of Books

"In his fine new book, Michael Kazin . . . makes an ambitious attempt to hone a unified theory of the Democratic Party’s 194-year record . . . [What It Took to Win] holds lessons for politics today . . . Well researched [and] accessible." —The Economist

"[Kazin] does not merely aim to offer context . . . His book exhorts Democrats to reacquaint themselves with their past battles against entrenched wealth and on behalf of ordinary people." —John Dickerson, The Atlantic

"[A] very fine new history of the Democrats . . . Nuanced . . . What It Took to Win is a rich but accessible book." —Sam Rosenfeld, The New Republic

"A lively, timely survey . . . [Kazin's] chapter on New York politics and Tammany Hall is brilliant . . . This should be today’s go-to book on its subject." —Kirkus Reviews (starred review)

"Kazin delivers a wonderfully detailed record of the Democratic Party, from its beginnings to the present . . . Kazin’s account is an unvarnished and illuminating look at the past and potential future of a political party that endures.” —George Kendall, Booklist (starred review)

"Over its two hundred year history, the Democratic Party has evolved from the party of Jefferson Davis to the party that took on powerful corporate interests, built our middle class, and passed Civil Rights. Today, we put workers—ALL workers—at the center of all we do. Michael Kazin expertly explains how it happened, and why our nation’s success depends on Democrats fighting for the dignity of work." —Senator Sherrod Brown, author of Desk 88

"Michael Kazin has written a necessary and indispensable book about the history of the party that Martin Van Buren used to call 'the Democracy,' a nickname that we badly need to dust off. A political institution that has contained multitudes and held the contradictory political forces of our society—civil rights leaders and progressive populists alongside Dixiecrats and ardent segregationists, labor unions alongside major corporations, policy reformers alongside big-city bosses—the Democratic Party today is still our last best hope for making democracy work for the common good, especially the common man and the common woman. Kazin's eye-opening and crisply written book grounds us in a richly textured history of how we got to the present moment in the struggle for both mass political participation and what he calls 'moral capitalism.'" —Congressman Jamie Raskin

“There’s no better time than a half century into a paralyzing partisan standoff with Republicans to ask what it has taken, historically, for Democrats to win elections. Michael Kazin’s immensely valuable history of the good the bad, and the ugly of the Democratic Party charts its long path from its antimonopoly and pro-white supremacy origins, two centuries ago, to its pro-labor, New Deal, mid-twentieth-century decades in power, to the partial and fragile victories of its pro-Silicon Valley, antiracist present.” —Jill Lepore, author of These Truths: A History of the United States

"Michael Kazin’s What it Took to Win is accessible and learned, detailed and sweeping, opinionated and attentive to other points of view. It is history in the grand style: literary, interdisciplinary, unafraid of drawing lessons for future conduct. Offered at a perilous moment, Kazin’s interpretation of the Democratic Party is essential reading." —Randall Kennedy, professor at Harvard Law School and author of Say It Loud!: On Race, Law, History, and Culture

“Reading this lively and intriguing book by the estimable Michael Kazin is like learning, at last, the full back story of an elderly great-uncle who has forever been at the family dinner table. There are those unsavory episodes he never told us; the remarkable achievements we’d half-forgotten about; and finally the reminder that he is too large a presence to entirely love or hate, for the family absolutely cannot survive without him.” —Adam Hochschild, author of Rebel Cinderella

"Whatever your politics are, you owe it to yourself to dive into Michael Kazin's What It Took To Win, his new, eloquent and pathbreaking history of the Democratic Party that will command your attention from the very first page. Kazin performs something of a miracle: He manages, all at once, to be elegantly concise, briskly comprehensive, and thoroughly engaging. You will meet historical figures you didn't know while understanding those who you thought you knew far better. This is history at its best: honest, critical, beautifully rendered—and inspiring." —E. J. Dionne Jr., author of Our Divided Political Heart and co-author of 100% Democracy

"For years distinguished historian Michael Kazin has written insightfully about labor, populists, liberals and the Left. Now he has turned his always astute eye to telling the fascinating and important history of the political party that for two centuries has struggled to keep these factions—and more moderate members—within the fold. Anyone who worries about the polarization of politics today, and particularly within the Democratic Party itself, will take comfort that the party has survived such ruptures before, but they will also learn from this master historian what the past can tell us about 'what it took to win.'" —Lizabeth Cohen, author of Saving America’s Cities

“An engaging and insightful chronicle of the world’s oldest political party and its leaders from the late eighteenth century to the present. Sensitive to the party’s shortcomings as well as its strengths, Kazin illumines the evolution of an internally-divided, ever-changing organization that resisted calls for racial equality during much of the nineteenth century and then evolved into the party of progressivism, the New Deal, the Great Society, and Barack Obama. Laced with revealing anecdotes and colorful character portraits, the book’s narrative of the changing fortunes and convictions of the party gives shape to the entirety of American political history.” —Alexander Keyssar, professor at Harvard University and author of Why Do We Still Have the Electoral College?

"Michael Kazin has written an inspired and sweeping account of the Democratic Party's struggle for moral capitalism and electoral power. With remarkable insight, Kazin weaves together different periods and players in the party's history, making sense of disparate pieces. The work of one of our great historians, What It Took to Win offers a compelling, clear-eyed argument about what Democrats have accomplished as well as their limitations. This is the single best history that we have about the Democratic Party." —Julian Zelizer, author of Burning Down the House: Newt Gingrich and Rise of the New Republican Party