Take Up and Read: A Novel (The Lost Detective Trilogy #3) (Paperback) 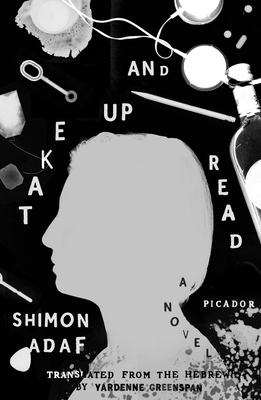 Take Up and Read: A Novel (The Lost Detective Trilogy #3) (Paperback)

This is book number 3 in the The Lost Detective Trilogy series.

"In Shimon Adaf's Lost Detective Trilogy, what begins as conventional mystery becomes by degrees a brilliant deconstruction not just of genre but of our own search for meaning. Both profound and compulsively readable, these books demand to be devoured." —Lavie Tidhar, author of By Force Alone

In the summer of 2014, at the height of the Gaza-Israel conflict, Elish Ben-Zaken met the poet and librarian Nahum Farkash in the border town of Sderot. They spoke only briefly, but in that brief encounter, Elish might have missed the key to unraveling the case of a Sderot woman who disappeared for two days, only to reappear with no memory of her time away.

In Take Up and Read, Shimon Adaf returns to Farkash’s story. Attempting to defend the legacy of the singer Dalia Shoshan—whose murder Elish investigated several years before—Farkash tries to impede the production of a new documentary about her life. Meanwhile, he reminisces about his past, reflecting on his experiences as a young religious boy growing up in Sderot.

Fourteen years later, in a militant Israel that has been distorted by catastrophic war, Elish’s niece and nephew are haunted by their uncle’s death and the failure of his 2014 investigation. As Tahel and Oshri conduct experiments in search of the truth, they draw near to the heart of a great conspiracy.

In this masterful conclusion to the Lost Detective Trilogy, Shimon Adaf brings together futuristic biotechnology, parallel universes, and Jewish mysticism. Take Up and Read addresses a central concern of the trilogy, interrogating humankind’s tenuous grasp on the boundaries of our selves, and the arbitrary connections between the body, consciousness, and perception.

Yardenne Greenspan is a writer and Hebrew translator born in Tel Aviv and based in New York. Her translations have been published by Restless Books, St. Martin’s Press, Akashic, Syracuse University, New Vessel Press, Amazon Crossing, and Farrar, Straus and Giroux. Her translation of Yishai Sarid's novel The Memory Monster was selected as one of The New York Times 100 Notable Books of 2020. Yardenne’s writing and translations have appeared in The New Yorker, Haaretz, Guernica, Literary Hub, Blunderbuss, Apogee, The Massachusetts Review, Asymptote, and Words Without Borders, among other publications. She has an MFA from Columbia University and is a regular contributor to Ploughshares.

"Adaf concludes his epic Lost Detective Trilogy with an extraordinary blend of science fiction, crime, and high fantasy . . . As with the previous installments, Adaf’s rich characterizations are complemented by the clever prose. The result is an instant classic." —Publishers Weekly (starred review)