David Smith: The Art and Life of a Transformational Sculptor (Hardcover) 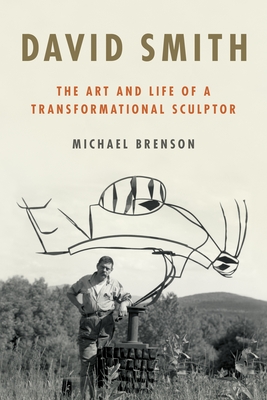 David Smith: The Art and Life of a Transformational Sculptor (Hardcover)

The landmark biography of the inscrutable and brilliant David Smith, the greatest American sculptor of the twentieth century.

The artist David Smith once wrote, “'Humanism' is a useless word in my time.” A member of the abstract expressionist generation, he would do more than any sculptor of his era to bring the plastic arts to the forefront of the American scene. Central to this project was his desire to explode the logic that equated representation and harmony with humanistic values in the postwar era—instead, Smith sought out the unbalanced and unexpected, creating works of art that seem to undergo radical shifts as the spectator moves from one point of view to another. So groundbreaking and prolific were his contributions to American art that by the time Smith was just forty years old, Clement Greenberg was already calling him “the greatest sculptor this country has produced.”

Michael Brenson’s David Smith: The Art and Life of a Transformational Sculptor is the first major biography of this epochal figure. It follows Smith from his upbringing in the Midwest, to his heady early years in Manhattan, to his decision to establish a permanent studio in Bolton Landing in upstate New York, where he would create many of his most significant works—among them the Cubis, Tanktomems, and Zigs. It explores his at times tempestuous personal life, marked by marriages, divorces, and fallings-out, as well as by deep friendships with the likes of Helen Frankenthaler and Robert Motherwell. His wife Jean Freas described him as “Salty and bombastic, jumbo and featherlight, thin-skinned and Mack Truck. And many more things”—and this was true of his work as well. He was a bricoleur, a skilled welder, a painter, and a writer, and he entranced critics and attracted admirers wherever he showed his work.

With this book, richly illustrated with more than one hundred photographs, Brenson has contextualized Smith for a new generation of fans and confirmed his singular place in the history of American art.

Michael Brenson was for two decades a member of the sculpture faculty at Bard College’s Milton Avery Graduate School of the Arts and he is the author of Visionaries and Outcasts: The NEA, Congress, and the Place of the Visual Artist in America. A former art critic for The New York Times and an eloquent voice on modern and contemporary sculpture, Brenson has been a Getty Scholar, a Bogliasco Fellow, a Clark Fellow, and a Guggenheim Fellow, and he was awarded a Creative Nonfiction Grant from the Whiting Foundation. He has curated exhibitions at MoMA PS1 and the Sculpture Center, and has organized and moderated conferences or panels at the National Gallery of Art, the Solomon R. Guggenheim Museum, the Rockefeller Foundation, and New York’s Jewish Museum. He lives in Accord, New York.

"Brenson’s rich, authoritative biography conjures not only the man and his myth, but also the ruptures of modernity and the tensions between abstraction and representation, set against a backdrop of global change." —Hamilton Cain, The Atlantic

"Brenson’s exactingly researched, richly analytical, and steadfastly eloquent biography is the first comprehensive study of the radical sculptor David Smith . . . Brenson precisely documents the making of Smith’s art and its reception; he also takes full measure of Smith’s unnerving anger, misogyny, and violence. But as troubling as Smith’s behavior is, his art, forged on the anvil of his pain, soars." —Donna Seaman, Booklist

"[David Smith] comes to life in this comprehensive biography . . . Brenson crafts a vivid mosaic of Smith’s life . . . [and] nimbly traces Smith’s evolution as an artist and a thinker . . . Engrossing and erudite, this is sure to fascinate the artist’s many admirers." —Publishers Weekly

"An epic achievement, perfectly proportionate to its subject, this magnificent biography gives a towering figure his due. Brenson captures with rare precision the texture of an artist’s life, following Smith from small-town Indiana to New York City to, most importantly, rural Bolton Landing, where he created a legendary field of welded metal sculpture that revolutionized his discipline. Brenson, a tireless sleuth, combines a wealth of new material with commanding knowledge of mid-twentieth-century art, and elucidates Smith’s work with grace and insight. He is frank about the artist’s personal flaws and nonetheless deeply sympathetic to Smith’s character as a person and artist. A propulsive, sweeping portrait." —Nancy Princenthal, author of Agnes Martin: Her Life and Art

"Protean, complex, attentive, disturbing, subtle, expansive, ground-breaking – words for sculptor David Smith’s art and life, and for Michael Brenson’s brilliant biography of Smith. So much is illuminated both by Brenson’s rare insight and by the chorus of women’s voices (friends, lovers, artists, gallerists, art critics, daughters) that decades of interviewing and immersion enable him to evoke; here is Smith’s violent and compelling personality, here is a different, more multitudinous, world of Abstract Expressionists, and, above all, here is Smith’s profound and wide-ranging artistic work. By book’s end, I felt I had gone to live in the upended world of Bolton Landing, and that I had walked Smith’s storied sculpture fields in the snow." —Rachel Cohen, author of Bernard Berenson: A Life in the Picture Trade and Austen Years

"This book is major achievement, the product of tireless research and deeply committed thinking about David Smith’s singular achievements as an artist and his fascinating, deeply flawed life. Brenson’s study shows real mastery of the biographer’s task—doing justice to the complex, often paradoxical interrelationships between Smith’s art and the social and personal circumstances within which his artistic endeavors were played out. Rightly committed to evaluating Smith’s art on its own terms, he refrains from making easy connections between the significance and expressive power of Smith’s sculptural achievements and the vicissitudes of his life. Still, this biography’s eminently readable narrative gives one valuable insight into the human, all too human basis of Smith’s unrelenting drive to realize a radically renewed sculptural practice in subterranean conflicts sustaining but also damaging him as a person. At the same time, the richly articulated picturing of Smith and his art situates his very distinctive persona within the fabric of political and cultural life in mid-twentieth-century America." —Alex Potts, Max Loehr Collegiate Professor emeritus at the University of Michigan and author of The Sculptural Imagination and Experiments in Modern Realism

"Michael Brenson’s biography vividly portrays the various worlds in which David Smith lived and worked, delineating the intellectual and artistic debates and the personal and historical forces that informed the creation of his oeuvre as well as the social relationships that sustained it. With its clear and comprehensive account of its subject, the book offers readers equally penetrating insights into Smith’s artistic achievement as well as the dynamic cultural milieu of mid-century American modernism." —Robert Slifkin, author of The New Monuments and the End of Man: U.S. Sculpture Between War and Peace, 1945-1975

"In August 1973, travelling around the US trying to find works by David Smith to look at, I found myself in Bolton Landing, beside Lake George in upstate New York, outside of Smith’s studio—Terminal Iron Works—peering through the chain link fence at the buildings and the remaining sculptures on site. I couldn’t get in and, trapped by bus schedules, spent the night there. Memorable and pretty close, but this outstanding biography allows us to get even closer to a complex, difficult, and demanding, but rich and deeply rewarding artist. And there are no clouds of mosquitoes to contend with! We have much to thank Michael Brenson for." —Richard Deacon, Turner Prize–winning sculptor