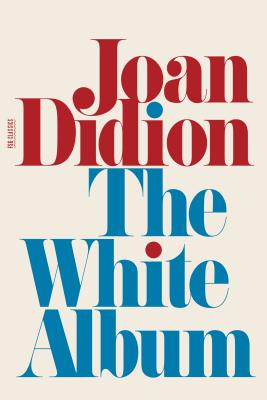 First published in 1979, Joan Didion's The White Album records indelibly the upheavals and aftermaths of the 1960s.

Examining key events, figures, and trends of the era—including Charles Manson, the Black Panthers, and the shopping mall—through the lens of her own spiritual confusion, Joan Didion helped to define mass culture as we now understand it. Written with a commanding sureness of tone and linguistic precision, The White Album is a central text of American reportage and a classic of American autobiography.

Joan Didion (1934-2021) was the National Book Award-winning author of many works of fiction and nonfiction. After earning a Bachelor’s degree in English at the University of California, Berkeley, she started her literary career writing articles and essays for Vogue, Mademoiselle, Life, The Saturday Evening Post, and National Review, establishing herself as a prominent member of the New Journalism movement. Her books include The White Album, Play It As It Lays, and Slouching Towards Bethlehem.

Shortlisted for the Pulitzer Prize, Didion’s revelatory memoir The Year of Magical Thinking was adapted as a one-woman stage show starring Vanessa Redgrave on Broadway. She also wrote several screenplays with her husband John Gregory Dunne, including Panic in Needle Park with Al Pacino, the second remake of A Star is Born with Barbra Streisand and Kris Kristofferson, and an adaptation of her own Play It As It Lays with Tuesday Weld and Anthony Perkins.

“[Didion] can strike at the heart, or the absurdity, of a matter in our contemporary wasteland with quick, graceful strokes.” —San Francisco Chronicle

“All of the essays--even the slightest--manifest not only [Didion's] intelligence, but an instinct for details that continue to emit pulsations in the reader's memory and a style that is spare, subtly musical in its phrasing and exact. Add to these her highly vulnerable sense of herself, and the result is a voice like no other in contemporary journalism.” —Robert Towers, The New York Times Book Review

“Didion manages to make the sorry stuff of troubled times (bike movies, for instance, and Bishop James Pike) as interesting and suggestive as the monuments that win her dazzled admiration (Georgia O'Keeffe, the Hoover Dam, the mountains around Bogota). . . A timely and elegant collection.” —The New Yorker