As It Turns Out: Thinking About Edie and Andy (Hardcover) 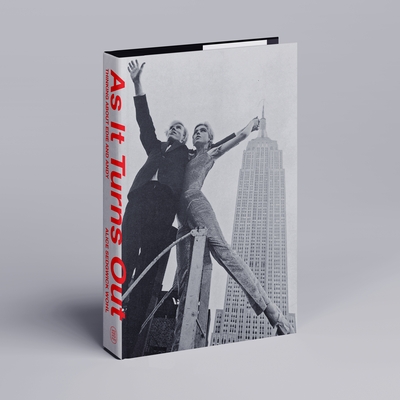 As It Turns Out: Thinking About Edie and Andy (Hardcover)

The story of the model, actress, and American icon Edie Sedgwick is told by her sister with empathy, insight, and firsthand observations of her meteoric life.

As It Turns Out is a family story. Alice Sedgwick Wohl is writing to her brother Bobby, who died in a motorcycle accident in 1965, just before their sister Edie Sedgwick met Andy Warhol. After unexpectedly coming across Edie’s image in a clip from Warhol’s extraordinary film Outer and Inner Space, Wohl was moved to put her inner dialogue with Bobby on the page in an attempt to reconstruct Edie’s life and figure out what made Edie and Andy such iconic figures in American culture. What was it about Andy that enabled him to anticipate so much of contemporary culture? Why did Edie draw attention wherever she went? Who exactly was she, who fascinated Warhol and captured the imagination of a generation?

Wohl tells the story as only a sister could, from their childhood on a California ranch and the beginnings of Edie’s lifelong troubles in the world of their parents to her life and relationship with Warhol within the silver walls of the Factory, in the fashionable arenas of New York, and as projected in the various critically acclaimed films he made with her. As Wohl seeks to understand the conjunction of Edie and Andy, she writes with a keen critical eye and careful reflection about their enduring impact. As It Turns Out is a meditation addressed to her brother about their sister, about the girl behind the magnetic image, and about the culture she and Warhol introduced.

Alice Sedgwick Wohl is an independent scholar and translator. Her translations include The Life of Michelangelo by Ascanio Condivi, The Lives of the Modern Painters, Sculptors and Architects by Giovan Pietro Bellori, and On Antique Painting by Francisco de Hollanda.

Named a Best Nonfiction Book of 2022 by The Washington Post

"Beautiful . . . Wohl adds sensitive shading and texture to the group portrait of the Sedgwicks that emerged in Edie—and a spray of light." —Alexandra Jacobs, The New York Times

"[As It Turns Out] picks apart how Andy made Edie, how Edie made Andy, and the infinity mirror of their shared identity. A great pleasure of Sedgwick Wohl’s writing is that it is sisterly in the truest sense: irritated but protective, dabbed with globs of jealousy . . . Wohl, who has spent decades watching her sister on film, observes her as if looking through a high-powered telescope." —Hillary Kelly, The New Yorker

“[Wohl] understands and explains the cultural impact and implications of Edie and Andy in a way nobody ever has. [As It Turns Out] is a brilliant and profound work, and, by the end, an almost unbearably moving one.” —Lili Anolik, Air Mail

"Wohl’s book is not a recollection or a mere revision but rather an attempt to understand the intense attention, even obsession, with Edie and Andy, and how their pairing anticipated the age of the influencer . . . Wohl’s description is essential to her (and our) understanding of Edie—but also to understanding ourselves, as we enact this tension on social media every day." —Jessica Ferri, The Los Angeles Times

“Unflinching in its honesty, Wohl’s memoir provides a disquieting glimpse into one family in America’s privileged class, a family made worthy of examination because one of its members—whose presence lives on luminously in her films—remains a source of fascination more than 50 years after her death.'" —Paul Alexander, The Washington Post

“Wohl . . . debuts with a perceptive account of her sibling’s life . . . Striking photos help tell the story, and Wohl’s exhaustive examination of her sister’s vulnerability and star appeal give this a unique position among the many books on the Warhol scene. The result is a thoughtful exploration of a tumultuous life.” —Publishers Weekly

"The life and times of Edie Sedgwick have been written about extensively, but never before like this. In As It Turns Out, Segwick's sister, Alice Sedgwick Wohl, writes (in the form of a letter to her late brother) about growing up as part of a complicated, grand family, the sister whose free spirit captured millions of imaginations, and the way her truncated life shaped our culture in ways that are still apparent today." —Adam Rathe, Town and Country

“In this sensitive, deeply considered chronicle, Wohl offers a fresh and incisive look at Edie’s headline-grabbing adventures with Warhol, her superstar power, and their symbiotic relationship while also musing on Warhol’s prescient anticipation of our obsession with images.” —Donna Seaman, Booklist

“Sharp descriptions of The Factory and Warhol’s art . . . and finally, some profound insights about pop art, the expanding culture of narcissism and the nature of celebrity.” —Mary Wisniewski, New City

“As It Turns Out . . . is the best book I’ve read pinpointing the New York art scene at a precise pinnacle of change. Along the way, it broke my heart.” —Patricia Volk, Avenue Magazine

"With words as clear cut as crystal, Wohl deftly unpacks the damaging hollowness of the monied world in which she and Edie were raised and contrasts it with the sometimes joyful yet gritty Silver Factory which was a perfect métier for Edie’s stream of consciousness way of living. Without a hint of hagiography we meet both Edie and Andy Warhol as they were, not quite 'just kids' but much more tongue-in-cheek than any self-appointed cultural icon today could dare to be. An extremely accurate portrait of Andy's highly complex personality." —Michael Findlay, author of Seeing Slowly: Looking at Modern Art

"Some stories just have to be told. As It Turns Out, Alice Sedgwick Wohl’s poignant account of her quest to understand the lost much-younger sister she never really knew—Pop Art icon Edie Sedgwick—pulses with the energy of revelation, the urgency of truth-telling. And there is more: a clear-eyed analysis of Andy Warhol in his heyday and of the enduring legacy of the image-making celebrity pair, Edie and Andy. Turns out Warhol’s not the mad-genius villain of this Mod morality tale. Read on and find out why." —Megan Marshall, author of Elizabeth Bishop: A Miracle for Breakfast

"As It Turns Out is a revelation. Alice Sedgwick Wohl reveals herself to be a remarkably talented writer who, with finely turned sentences and lyric passages, paints an unforgettable picture of the strange and singular childhood that produced both herself and her sister Edie Sedgwick . . . Wohl shrewdly analyses the unlikely but perfect partnership between Edie and Andy. Edie and Alice’s vast Santa Barbara ranch, in which appearances were everything, corresponded perfectly with Warhol’s vision of an art in which under the surface of everything there was only more surface." —Alexander Stille, author of The Force of Things

"Although Edie Sedgwick is always toasted as the Youthquaker socialite of Manhattan, it was isolation on a ranch in California that formed her. Her oldest sister, Alice Wohl, magically evokes the natural wonder of her surroundings—as well as the challenges of growing up in a psychologically complicated family. Commandingly told and original in form, As It Turns Out combines family memoir with an effort to understand the sister Alice barely knew. A broad audience will be riveted by her observations about the symbiotic connections between Edie and Andy and their enduring impact." —Steven Watson, author of Factory Made: Warhol and the Sixties

“Wohl . . . debuts with a perceptive account of her sibling’s life . . . Striking photos help tell the story, and Wohl’s exhaustive examination of her sister’s vulnerability and star appeal give this a unique position among the many books on the Warhol scene. The result is a thoughtful exploration of a tumultuous life.” —Publishers Weekly