A Woman's Battles and Transformations (Hardcover) 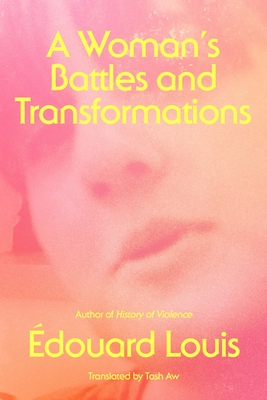 A Woman's Battles and Transformations (Hardcover)

A Woman's Battles and Transformations is a portrait of the author’s mother by the acclaimed writer of the international bestsellers The End of Eddy and History of Violence.

Late one night, Édouard Louis got a call from his forty-five-year-old mother: “I did it. I left your father.” Suddenly, she was free.

This is the searing and sympathetic story of one woman’s liberation: of mothers and sons, of history and heartbreak, of politics and power. It reckons with the cruel systems that govern our lives—and with the possibility of escape. Sharp, short, and fine as a needle, it is a necessary addition to the work of Édouard Louis, “one of France’s most widely read and internationally successful novelists” (The New York Times Magazine).

Born Eddy Bellegueule in Hallencourt, France, in 1992, Édouard Louis is a novelist and the editor of a scholarly work on the social scientist Pierre Bourdieu. He is the coauthor, with the philosopher Geoffroy de Lagasnerie, of “Manifesto for an Intellectual and Political Counteroffensive,” published in English by the Los Angeles Review of Books.

Tash Aw was born in Taipei and brought up in Malaysia. He is the author of The Harmony Silk Factory, which was the winner of the Whitbread First Novel Award and the Commonwealth Writers’ Prize for Best First Novel and was long-listed for the Man Booker Prize; Map of the Invisible World; and Five Star Billionaire, also longlisted for the Man Booker Prize in 2013. He is also the author of a memoir of an immigrant family, The Face: Strangers on a Pier, a finalist for the LA Times Book Prize.

“The writing [in A Woman's Battles and Transformations] is intensely lyrical but the subject rubs up against the political . . . Moving and beautiful.”
—David Keymer, Library Journal (starred)

“Ravishing . . . This one-sitting read, slim and complete, dazzles with memories sieved to their finest grains and affirms the extraordinary power of writing.”
—Annie Bostrom, Booklist

“While the narrative is pulled from his life, the personal is always political—and Louis tracks his mother’s violence and pain as intertwined with capitalism, patriarchy, and systems beyond our control. Translated by his friend and novelist Tash Aw, this is not to be missed.”
—Jonny Diamond, Lit Hub (most anticipated)

Praise for The End of Eddy

“Excellent . . . Not just a remarkable ethnography. It is also a mesmerizing story about difference and adolescence, one that is far more realistic than most.”
—Jennifer Senior, The New York Times

“Brilliant . . . Freighted with an ambivalence that animates the book and gives it a devastating emotional force. . . At once an act of solidarity and an act of vengeance.”
—Garth Greenwell, The New Yorker

Praise for Who Killed My Father

“[Édouard Louis is] a global literary sensation . . . To understand what is happening now in France, or indeed, all over Europe, this is an essential text.”
—The Irish Times

“Who Killed My Father is a political document that uses the force of memoir—incisive, confessional personal details—to bolster its argument that Louis’s father’s life (and by extension, his family) was ruined by politics. Compelling.”
—Kevin O’Rourke, Los Angeles Review of Books

“Édouard Louis [is] the vanguard of France’s new generation of political writers . . . He has given his people a voice.”
—Arjun Neil Alim, Evening Standard

“Literary phenomenon Édouard Louis . . . gives voice to the way the cruel, crude hegemony of masculinity has essentially destroyed his father’s life . . . The careful, deliberate narrative reads as if Louis were testifying, or building a case for a jury in real time.”
—Lauren Elkin, The Guardian