The Trial: A History, from Socrates to O. J. Simpson (Hardcover) 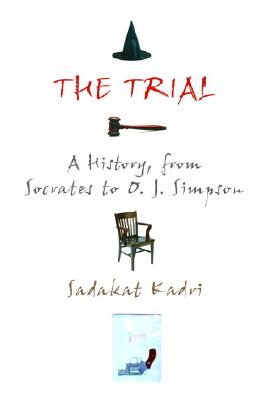 The Trial: A History, from Socrates to O. J. Simpson (Hardcover)

For as long as accuser and accused have faced each other in public, criminal trials have been establishing far more than who did what to whom–and in this fascinating book, Sadakat Kadri surveys four thousand years of courtroom drama.

A brilliantly engaging writer, Kadri journeys from the silence of ancient Egypt’s Hall of the Dead to the clamor of twenty-first-century Hollywood to show how emotion and fear have inspired Western notions of justice–and the extent to which they still riddle its trials today. He explains, for example, how the jury emerged in medieval England from trials by fire and water, in which validations of vengeance were presumed to be divinely supervised, and how delusions identical to those that once sent witches to the stake were revived as accusations of Satanic child abuse during the 1980s.

Lifting the lid on a particularly bizarre niche of legal history, Kadri tells how European lawyers once prosecuted animals, objects, and corpses–and argues that the same instinctive urge to punish is still apparent when a child or mentally ill defendant is accused of sufficiently heinous crimes.

But Kadri’s history is about aspiration as well as ignorance. He shows how principles such as the right to silence and the right to confront witnesses, hallmarks of due process guaranteed by the U.S. Constitution, were derived from the Bible by twelfth-century monks. He tells of show trials from Tudor England to Stalin’s Soviet Union, but contends that “no-trials,” in Guantánamo Bay and elsewhere, are just as repugnant to Western traditions of justice and fairness. With governments everywhere eroding legal protections in the name of an indefinite war on terror, Kadri’s analysis could hardly be timelier.

At once encyclopedic and entertaining, comprehensive and colorful, The Trial rewards curiosity and an appreciation of the absurd but tackles as well questions that are profound. Who has the right to judge, and why? What did past civilizations hope to achieve through scapegoats and sacrifices–and to what extent are defendants still made to bear the sins of society at large? Kadri addresses such themes through scores of meticulously researched stories, all told with the verve and wit that won him one of Britain’s most prestigious travel-writing awards–and in doing so, he has created a masterpiece of popular history.

Advance praise for The Trial

“A vivid, colorful, anecdote-driven, witty, and intellectually provocative history of that most ubiquitous Western institution, the criminal trial. Anyone interested in the trial’s various current pop-cultural manifestations will find this book an edifying journey as well as a fun read.”
–Nadine Strossen, professor of law, New York Law School, president of the American Civil Liberties Union

“Amusing and colourful and anecdotal . . . a deeply thoughtful book of great contemporary relevance . . . Kadri’s panoramic and, yes, pragmatic viewpoint leaves the reader with moral and political insights that equip us to understand better our own disquieting times. That is a real achievement.”
–The Guardian (London)

“A timely book. Kadri makes it clear how long it has taken to arrive at this supposedly high point in judicial history, and consequently fires a warning shot at those who seek to erode hard-won legal traditions.”
–The Observer (London)

“Sadakat Kadri traces the development of the criminal trial through the ages . . . with verve, intelligence, humour, and clarity. . . . He tells good stories deftly managing to mix anecdote and serious analysis. An impressive performance.”
–The Times (London)

“This is a work of tremendous ambition: a panoramic review of law and justice told through powerful, individual stories. The book tackles dark themes, from the history of vengeance to the modern revival of torture, but navigates the horrors with glittering prose, sparkling wit, and boundless enthusiasm. At a time when politicians are discarding and exploiting legal traditions, it should be read by anyone interested in justice and the state of world.”
–Helena Kennedy, leading U.K. barrister