The Death of the Banker: The Decline and Fall of the Great Financial Dynasties and the Triumph of the Sma ll Investor (Paperback) 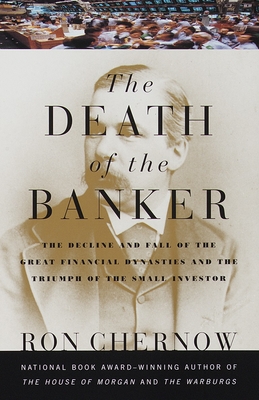 The Death of the Banker: The Decline and Fall of the Great Financial Dynasties and the Triumph of the Sma ll Investor (Paperback)


Special Order—Subject to Availability
"For anyone interested in the world behind the business-page headlines, this is the book to read." --Publishers Weekly

With the same breadth of vision and narrative élan he brought to his monumental biographies of the great financiers, Ron Chernow examines the forces that made dynasties like the Morgans, the Warburgs, and the Rothschilds the financial arbiters of the early twentieth century and then rendered them virtually obsolete by the century's end.

As he traces the shifting balance of power among investors, borrowers, and bankers, Chernow evokes both the grand theater of capital and the personal dramas of its most fascinating protagonists. Here is Siegmund Warburg, who dropped a client in the heat of a takeover deal because the man wore monogrammed shirt cuffs, as well as the imperious J. P. Morgan, who, when faced with a federal antitrust suit, admonished Theodore Roosevelt to "send your man to my man and they can fix it up."  And here are the men who usurped their power, from the go-getters of the 1920s to the masters of the universe of the 1980s. Glittering with perception and anecdote, The Death of the Banker is at once a panorama of twentieth-century finance and a guide to the new era of giant mutual funds on Wall Street.

"Chernow . . . delivers a sound, accessible account of the forces shaping capital, credit, currency, and securities markets on the eve of a new millennium. "
--Kirkus Reviews
Ron Chernow’s bestselling books include The House of Morgan, winner of the National Book Award; The Warburgs, which won the George S. Eccles Prize; The Death of the Banker; Titan: The Life of John D. Rockefeller, nominated for the National Book Critics Circle Award; Washington: A Life, which received the Pulitzer Prize for Biography; and Alexander Hamilton, nominated for the National Book Critics Circle Award and adapted into the award-winning Broadway musical Hamilton. Chernow has served as president of PEN American Center, has received six honorary doctoral degrees, and was awarded the 2015 National Humanities Medal. He lives in Brooklyn, New York.