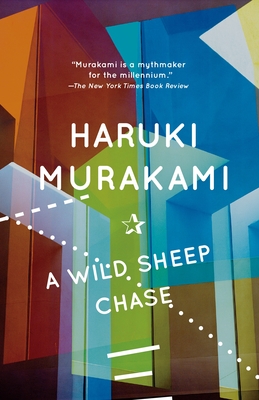 
On Our Shelves Now at:
A New York Times bestselling author—and “a mythmaker for the millennium, a wiseacre wiseman” (New York Times Book Review)—delivers a surreal and elaborate quest that takes readers from Tokyo to the remote mountains of northern Japan, where the unnamed protagonist has a surprising confrontation with his demons.

An advertising executive receives a postcard from a friend and casually appropriates the image for an advertisement. What he doesn’t realize is that included in the scene is a mutant sheep with a star on its back, and in using this photo he has unwittingly captured the attention of a man who offers a menacing ultimatum: find the sheep or face dire consequences.
Born in Kyoto, Japan, in 1949, HARUKI MURAKAMI grew up in Kobe and now lives near Tokyo. The most recent of his many honors is the Yomiuri Literary Prize, whose previous recipients include Yukio Mishima, Kenzaburo Oe, and Kobo Abe. His work has been translated into more than fifty languages.
“Murakami is a mythmaker for the millennium, a wiseacre wiseman.” —New York Times Book Review

“A witty adventure ... a piece of verbal anarchy ... a labyrinthine mystery from start to finish.” —San Francisco Chronicle