Buddhist Wisdom: The Diamond Sutra and The Heart Sutra (Paperback) 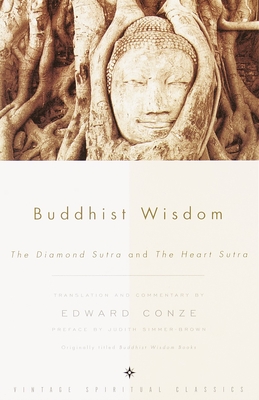 Buddhist Wisdom: The Diamond Sutra and The Heart Sutra (Paperback)


Not On Our Shelves—Ships in 1-5 Days
A landmark publication that offers Western readers a unique combination of what Buddhists worldwide consider the holiest of holy texts, The Diamond Sutra and The Heart Sutra.

The Diamond Sutra, or the Perfection of Wisdom, which cuts like a thunderbolt, is one of the cornerstone texts of Mahayana Buddhism and provides a summary of the core concepts of the Buddha. The Heart Sutra, perhaps the most important of all Buddhist texts, sets out to formulate the very heart, or essence of perfect wisdom and is studied with special reverence in Zen monasteries and the Tibetan Buddhist lamaseries.

Edward Conze, who was until his death in 1979 a powerful force for introducing Buddhism and its sacred texts to the West, has provided these translated key texts with an extensive commentary for the easiest possible appreciation phrase by phrase.  For this new edition, Judith Simmer-Brown, a well-known American scholar of Buddhism, has contributed a lively, context-setting introduction.

In the annals of spirituality, certain books stand out both for their historical importance and for their continued relevance. The Vintage Spiritual Classics series offers the greatest of these works in authoritative new editions, with specially commissioned essays by noted contemporary commentators. Filled with eloquence and fresh insight, encouragement and solace, Vintage Spiritual Classics are incomparable resources for all readers who seek a more substantive understanding of mankind’s relation to the divine.
EDWARD CONZE (1904-1970) was born in England but was educated in Germany through postdoctoral studies in Bonn and Hamburg. When Hitler came to power in 1933, Conze returned to England and taught for the better part of three decades, until 1960, at Oxford and London Universities. His subjects included psychology, comparative religion, and philosophy. A lifelong commitment to the translation, explication, and propagation of the classic scriptural texts of Buddhism was the hallmark of his achievement.
"The gifted translator Edward Conze's work has never been surpassed." —Judith Simmer-Brown