The Quotable Fulton Sheen: A Topical Compilation of the Wit, Wisdom, and Satire of Archbishop Fulton J. Sheen (Hardcover) 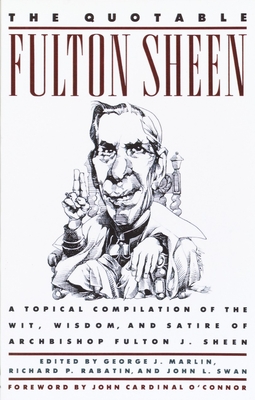 The Quotable Fulton Sheen: A Topical Compilation of the Wit, Wisdom, and Satire of Archbishop Fulton J. Sheen (Hardcover)


Special Order—Subject to Availability
Published to commemorate the tenth anniversary of the death of Archbishop Fulton J. Sheen, this scintillating collection captures the essence of one of the greatest religious leaders of our day.  Devout priest, powerful orator, and prolific writer, participant in Vatican Council II and director of the Society of the Propagation of the Faith, Fulton Sheen was internationally recognized through his radio and television ministry, his scores of books and syndicated columns, and his worldwide travel.

Arranged alphabetically by topic and containing 1,300 entries on hundreds of subjects – from Absolution to Zoophilists – this comprehensive anthology exemplifies the tremendous faith, wisdom, humor, and goodness of the beloved prelate.  This compilation features a Foreward by John Cardinal O'Connor and tributes by notables as Billy Graham and Malcolm Muggeridge, and is a must for every Christian library.  Speakers, too, will find here a useful resource for that needed "right quote" or apt illustration.

The Quotable Fulton Sheen is a one-volume treasure trove for readers of all ages.
Venerable Fulton J. Sheen was an archbishop of the Catholic Church. His cause for canonization as a saint was opened in 2002, and in 2012 Pope Benedict XVI recognized a decree stating that he had lived a life of “heroic virtues” and is now posthumously referred to as Venerable. Sheen was host of the radio show The Catholic Hour between 1930 and 1950 before switching to television as the host of Life Is Worth Living and then The Fulton Sheen Program. He was a two-time Emmy Award winner for Most Outstanding Television Personality, and his face appeared on the cover of Time magazine. He died in 1979, and is now remembered as one of the world's first televangelists.